For many travellers Barcelona means an opportunity to admire great architectural masterpieces.

For students at Futures Institute Banbury, it was also a chance to sample some of the more science-orientated delights of the city.

Twelve students from Years 9 & 10 recently enjoyed a four-day visit to the popular Spanish city under a rolling three-year programme to visit European sites of scientific and engineering interest.

The trip included a visit to a museum under the Sagrada Familia and hours spent musing around the Cosmo Caixa Science museum where they were warned not to put their fingers in the infinity pool as ‘’the carnivorous fish think a human hand is a bunch of 5 worms to eat.’’

The experience has left our students keen to produce a guide especially for other science pupils – watch this space!

The trip was led by Julia Ingham, Head of Futures Institute, and the itinerary was organised by Dr Catherine Pickup, Director of Project-based learning at Futures. Here she provides an overview of how they spent their time and shares the hidden gems uncovered. 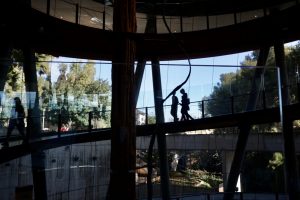 The start of the year is a great time to visit Barcelona and we were lucky with the weather. Britain may have been battered by storms but our visit to the Spanish city saw us enjoy temperatures of up to 20 degrees!

We did the iconic Sagrada Familia [the large unfinished basilica was designed by Antoni Gaudi and his work on the building is part of a UNESCO World Heritage Site].

The audio guide was clear and informative and well received by students and if you get the chance to visit late afternoon, as we did, you get the most amazing light through the sunset windows.

After touring the 5 sites on the guide we handed the audio sets back and were then free to visit the site at will.

The Gaudi designed school was interesting but don’t miss (and it is a bit hidden) the museum under the basilica (turn left and go down after the audio hand-in point). There are  hands-on displays of elements from nature that inspired Gaudi, a video presentation and a fascinating link between Gaudi’s 3D modelling using string and sandbags and the modern workshop using CADCAM.

The basilica will now be finished this decade due to modern design techniques and the financial input from the hordes of Instagram-loving visitors.

As a complete contrast to the crowds of Sagrada Familia we can recommend the Cosmo Caixa Science museum.

You could spend the whole day there – as many Spanish schools do – and the site is big enough to absorb large groups.

Cosmo Caixa also makes for a chilled experience for teachers as the students are engaged but enveloped. 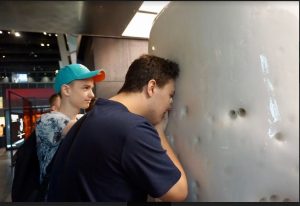 Once inside, there are descriptive signs in English (as well as Catalan and Castilian) but it could do with a more detailed guide about all the wonderful science artefacts on show and the interactive displays.

Our students loved their day at the Cosmo Caixa so much they have been inspired to write such a guide, so watch this space!

Upon entering the Cosmo Caixa at ground 0, the spiralling staircase offers the best way down as it takes you to all five levels (see picture above).

Level 0 is home to a group entrance and interactive exhibit linking shapes in science and nature.  Level -1 is a large open area with shade shallow pools, urban gardens and a reasonably priced café.
Level -5 provides access to number of exhibits:  connected to Arctic exploration – there is a 2m high block of ice illustrating the triple point of water (see picture above).
The Evolution exhibit has fossils connected to human evolution and those belonging to a sabre tooth tiger
The Universe exhibit has illustrations of physics and maths principles and things like the explosive patterns of meteorites.
The highlight is the flooded rainforest: you go underneath the forest where there are anaconda and fish then up through the ground level where there are birds and timed rainfall to refresh the massive 5 story high trees.

A word of warning, don’t let the students put their fingers in the infinity pool for the reason stated on the sign: “the carnivorous fish think a human hand is a bunch of 5 worms to eat’’. 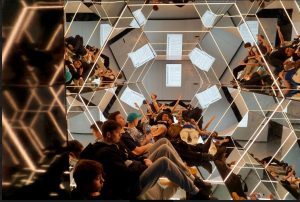 Our students enjoyed the temporary exhibit on mirrors which provided a full explanation of the physics in the descriptive signs but all the fun of the fair with kaleidoscopes for all heights and mirrored tunnels (see picture above).

Favourite exhibits for the teachers were the model of Ryukan school in Norway that uses mirrors on the mountain to shine light into the winter dark playground and The Sextant, an ancient navigation tool, being used by Apollo 8.

Getting around Barcelona was not a problem. It’s easy to get around on foot which we did and also used a 2-day transport card. The metro is clean and efficient (you will need a speedy plan to get on and off) and can take you just about anywhere.

However, beware that during the months of January and February some things like the funicular are closed for maintenance and Barcelona contours can involve going up as well as down.            The tickets need to be looked after – usually there was someone helpful to swop them if they broke but we discovered that creasing them up in your pocket broke them – as did biting (Futures students like to experiment!). 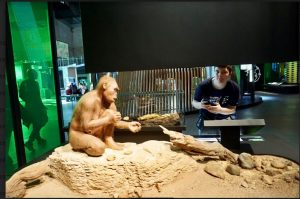 With many museums free the 1st Sunday of the month or after 3pm on Sundays, we took a guided tour of the Gothic quarter to discover the Roman walls of Barcelona and visit the Museum of the History of Barcelona.

Finally, don’t miss a trip to the city beach! We cooled our tired feet, built sand sculptures and made a fine collection of sea glass (see picture below).

A great time was had by all! 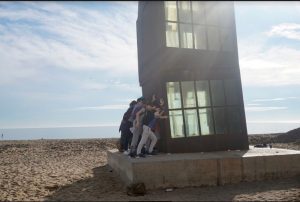