It was a glorious spectacle that brought the curtain down on four days of joyous nationwide celebrations to mark the Queen’s Platinum Jubilee.

And one member of staff at a Feltham secondary school found herself with a key role in the Pageant.

Ms Patel together with her husband Nikhil were amongst 250 performers who formed The Wedding Party, a dance procession which made its way from Whitehall through to Admiralty Arch and The Mall before finishing outside Buckingham Palace.

Nutkhut is a South Asian led dance company with Commonwealth connections. The procession was a nod to the wedding of the Duke of Edinburgh and the Queen who is the Head of the Commonwealth. 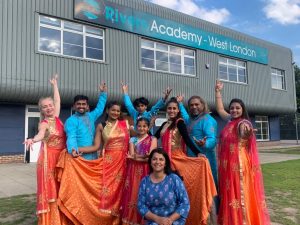 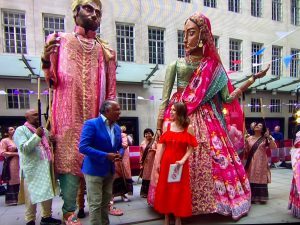 Featured on The One Show with Alex Jones

The colourful display included dances to a string of Bollywood songs and two giant-sized puppets of Indian newlyweds.

Ms Patel was given the responsibility of choreographing the puppet bride who was dressed in an ornate sari made from recycled plastic bottles.

Nuthkut’s preparations for the Pageant even featured on BBC One’s The One Show – much to Ms Patel’s delight.

Explaining why she got involved, Ms Patel told the Hounslow Herald: “I love the Queen and this was our chance to show her how much she means to us. All the late nights spent rehearsing and weeks devoted to practice sessions were all for her and it was worth it.

“She is the head of our country and has spent 70 years on the throne and 70 years devoted to service. It’s remarkable and a once-in-a-lifetime moment.

“It has all been surreal: Being involved in The One Show and meeting Anton du Beke and Alex Jones and then taking part in the Pageant. But I’m 100% happy to have taken part and to have created so many special memories in the process.” 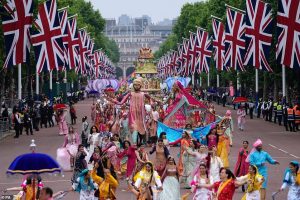 At the Queen’s Platinum Jubilee Pageant

The wedding Party group was made up of professionals and volunteers, all handpicked by Ms Gupta, and working together for the first time to create a memorable moment for the Queen.

Ms Patel revealed she spent weeks in practice sessions and was also given permission to use the premises of Rivers Academy West London where the bride and groom puppets were unveiled for the first time. The school’s impressive grounds were used for a key rehearsal before the big day.

Ms Patel said: “Nutkhut and I would like to thank Andria Singlehurst, Principal of Rivers, for allowing us to use the school’s grounds for such an important rehearsal.” 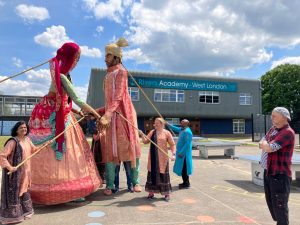 The Queen’s Pageant covered a 3km route with the aim of mimicking the Queen’s original coronation procession.

It featured four themes: For Queen and Country, The Time of Our Lives, Let’s Celebrate and Happy & Glorious.

Over 10,000 people from across the United Kingdom and the Commonwealth took part for the spectacle which combined street arts, music, puppets, carnival and costume to celebrate the Queen’s reign.