The transition from primary to secondary can be a stressful time for children and the disruption caused by Covid-19 has left Year 6 pupils facing additional uncertainty.

At Bovington Academy, Principal Sara White was offered some help from a serving Army Officer.

Year 6 students at the primary school have been given mindfulness sessions organised by Major Pat Burgess, based at the nearby Armour Centre, to equip them with strategies that will support them through the process.

Over a six-week period before the end of term, Major Burgess held classes with the pupils teaching them breathing exercises to help them feel calm and techniques designed to boost the wellbeing of their minds.

Ms White, who below provides her best tips for parents to help their child
before the start of school in September, told the Dorset Echo: ‘’There is more worry about secondary transition this year and it has created a little more unrest for the children.
‘’There is always an element of worry because it’s change and with change always comes that slight anxiety about something new.
‘’In the past we’ve been able to visit secondary schools and been able to take children there but Government guidance has not allowed that this year. Secondary schools have provided virtual transition sessions but it’s not the same as face-to-face and it has created a little bit more unrest around what is happening.
‘’A lot of positive has come out of lockdown – our pupils have adapted and developed different skills. However, it’s really important to equip children with the ability to adapt and to let them know it’s ok to be worried about change but to have the strategies to cope.
‘’This is where the mindfulness sessions with Pat have been so useful in providing that support for the children.’’

Major Burgess has most recently been awarded an MBE in recognition of his tireless work in bringing mindfulness to the world of defence. He has a BSC (Hons) in Psychology, a Diploma in Mindfulness and has been trained in Mindfulness Based Cognitive Therapy at Oxford. 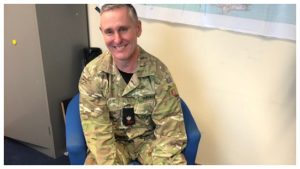 He said: ‘’This is preparation for next steps done in a really positive light, done in a way that we’re preparing for the next step as an inevitable step and the way you face it is down to you as an individual. So giving them the ownership but arming them with the skills and the knowledge and then to be able to take those steps almost seamlessly and yes, there will be unrest and there will be a bit of getting used to it but arming them so they can deal with it when they get there.

‘’We’ve been focusing on a combination of breathing techniques to help them feel calm if they find themselves feeling anxious, asking them to talk about their feelings and also to focus on the positive – change is good. Helping them to understand that change is the only thing that you can count on. Nothing stands still.’’

With approximately 70% of students at Bovington Academy from families with a military background it is unsurprising that the school has a close relationship with the Armour Centre. 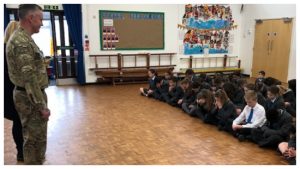 Major Pat Burgess pictured during a mindfulness session with students

Major Burgess’ interest in mental health, resilience and more specifically mindfulness started in 2009 whilst on operations in Afghanistan. He is a member of the Defence Mindfulness Steering Group and runs mindfulness classes for both military and civilian staff at the Armour Centre in Bovington.