Artemis the eco-friendly dinosaur joins Harriers academy and has made the popular forest area her new home!

The popular forest area at Harriers Academy is now home to a new resident with eco-credentials that befit her surroundings!

Students at the school have taken great delight in welcoming Artemis, a model dinosaur who is almost 5ft tall and 12ft long. She was created using discarded plumbing tubes, shredded paper and unwanted plastic bags.

The pair were brainstorming for enrichment ideas that would benefit pupils and were keen to fill the space at the end of the academy’s field that is used for Forest School activities. 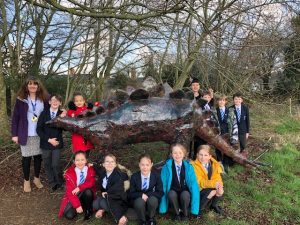 Ms Lyons told the Banbury Guardian: ‘’Lyn and I are both artistic and we knew a project like this would suit our skills. We also knew that if we created a dinosaur that it could be a project that every child could have a go at getting involved in making and it could be something they could be proud of.

‘’With a forest on the doorstep we thought it would be interesting to have something like that out there in that space.’’

Miss Maycock added: ‘’Initially it was going to be small but then we decided let’s go big! We chose the name Artemis because she was the Greek Goddess for the protection of forests and woodland and small children, so we thought it was apt.’’ 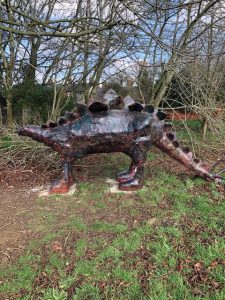 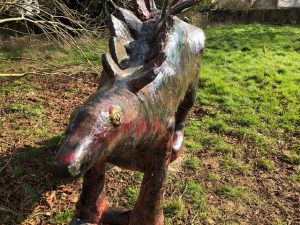 Chicken wire was used to hold the plumbing tubes in place and to give the dinosaur shape.

Other materials used included papier mache, wood to create the tail and the plates on the back were made out of used newspapers. A local company that serves hotels and restaurants provided a batch of unwanted cotton serviettes which were dipped in plaster and applied like plaster cast. This was placed on top of the papier mache and mod rock then used.

Some 10 to 12 layers of different types of material were used to mould and shape Artemis into the creature she is. The school has almost 400 pupils and every child in years 1 to 6 had a go at doing something towards the dinosaur’s construction including painting her.

A base colour of brown was used before a mixture of eight to 10 different other shades were applied. Yacht varnish provided a top coat to protect her from the elements.

Ms Lyons and Miss Maycock spent two days a week working on Artemis after starting the project in September 2018 and finished last month.

Nine-year-old Amelie Holmes who is in Year 4 said: ‘’It was a big experience. I liked learning new things about art and making new things. It looks very realistic.’’

Eight-year-old Aaliya Tabasm, also in Year 4, added: ‘’It was really fun and creative to be involved in making Artemis. I helped to stick on the papers and I like to sit by her.’’