The launch of the Falcon 9 rocket from Cape Canaveral Air Force Station was witnessed by a number of lucky Aspirations Academies students currently on their NASA trip –  and they found the spectacle spine-tingling!

The aim of Musk’s Starlink project is to launch and operate a network of broadband satellites to provide connectivity on a global level and control a sizeable share of the future internet space market.

This latest mission delivered the fifth load of 60 satellites and there are now around 300 Starlink satellites in orbit and the number is expected to grow to thousands.

However the billionaire entrepreneur’s controversial plans have raised concerns from some in the astrological community. Critics fear installing a mega-constellation of satellites in low Earth orbit will have a negative impact on the natural constellations.

For the Aspirations students gathered at the Veterans Memorial Park in Titusville, Florida, to watch the event unfold, awe was the overriding emotion. 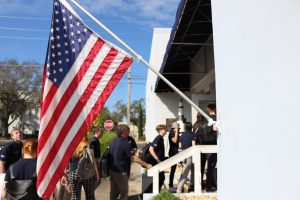 Luke van Eldik, 17, from Space Studio West London, was thrilled to witness the launch: “I had never seen a rocket launch before, so it was a really exciting experience!”

“The launch had already been delayed from yesterday (Sunday 16 th Feb) due to an issue with a valve component, so we were really lucky to catch it, as we only arrived in Florida yesterday!”

“Next year, I will be applying to study Aerospace Engineering at the University of Cambridge, so having the opportunity to witness the marvel of an actual rocket launch both personally inspiring, as well as incredibly valuable for my personal statement and the rest of the application process for when I begin applying for university!” he added.

While at the memorial park, students were also able to observe the memorials placed in honour of the many engineers that had been working on various missions throughout history.

This gave the students an insight into the valuable work carried out by those behind-the-scenes in the space industry.

Many of the exhibitions and visitors’ centres are designed to commend the astronauts, and those that built the spacecraft can often be overlooked.

Suvarunika Thirumaran, 16, also from Space Studio West London agreed that “it is really important to recognise all of the people that are involved in the process of sending humans in to space”

“There are a lot of people that work in the background roles and make the missions possible as well as the astronauts that physically go in to space. The engineers that design these missions are often the brain power and the motivators of pursuing the future,” she added. 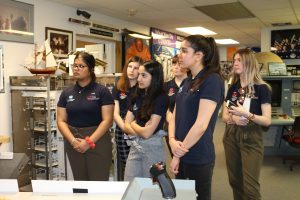 After watching the SpaceX launch, the students then travelled across the road to walk around to tour the American Space Museum, a museum set up by ex-industry volunteers, which has many donated items from individuals, astronauts, space workers, NASA and contractors.

While at the museum, the students were treated to an inspirational talk from John Tribe, a former NASA propulsion engineer and fellow British compatriot, who once worked extensively on Apollo missions.

Mr Tribe (pictured below) delivered a talk to the students about his career and offered his own advice to the students for leading a successful career in the industry: “You need to have the ability to personalise your interface with other people and work collaboratively. The most important skill in our industry is teamwork!” 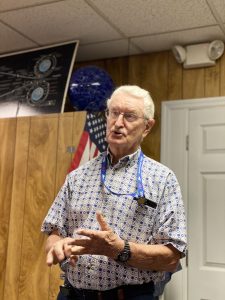