Pad 39B is one of three launch pads that is currently being prepared for a NASA mission that seeks to send humans to the moon in 2024.

And it is a sight that was witnessed by a group of Aspirations students for the first time.

In over 15 years of Space Education Adventures organising the annual visit to NASA sites in the United States for students from our Trust, this opportunity had never presented itself – and it remained a surprise up until the moment they arrived. 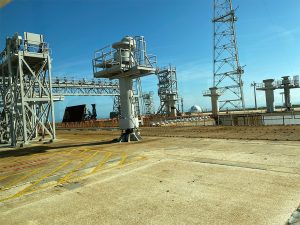 The students were being driven around Florida’s Kennedy Space Center on a vintage bus when it became clear that they were heading towards the launch site, which is usually restricted from public access.

The experience proved to be surreal for many of our students who were left speechless over the sheer size of the site. 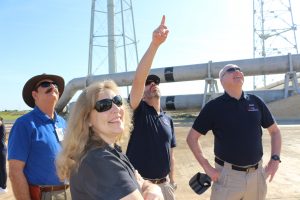 Pad 39B is one of three launch pads on the Launch Complex 39 rocket launch site which is currently being prepared for NASA’s Space Launch System.

The next generation rocket is currently under development to carry humans to the moon, Mars and perhaps, one day, deep space.

The first destination is the moon where NASA plans to land a human mission in 2024.

The SLS will continue to evolve even after humans take flight in it. This is because the rocket has a modular design comprised of interchangeable parts, which allows for a variety of mission goals and improving technology over time. 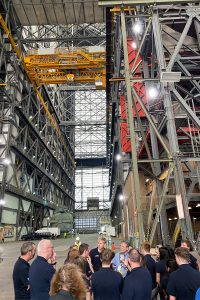 Leah Pachnanda, 16, from Rivers Academy West London, said: “Getting to see the launch pad up close was a truly amazing experience, I can’t believe I stood about five feet away from where real rockets have reached the moon!”

“The technology and systems that they have in place is so detailed, from the lightening cables to the sound suppression tanks which release half a million gallons of water intonthe fire trench – it was crazy! It was a real privilege to be the first group of Aspirations students to see such an important site for space exploration” she added.

After visiting the launch pad, the students were guided to NASA’s Vehicle Assembly Building (VAB), which is the largest single-storey building in the entire world at a whopping 526 feet, and was built to fit the iconic Saturn V rocket standing vertically.

Tanaiya Karavadra, 16, also from Rivers Academy West London, said that: “Seeing the VAB was awesome. Just as I thought I had seen the ceiling, I was told that was only half way to the top and then saw the rest of the building! It was so cool to step in to the very building where so many rockets have been worked on, and you can genuinely imagine them there as you can visualise the size of these colossal spacecraft!”

The world-renowned VAB was not the last item on the days itinerary, as the group were then taken to the Neil Armstrong Operations and Checkout Building for a glimpse of the Virtual Reality (VR) laboratory.

The VR in use is similar to the technology that has been distributed to Aspirations Academies Trust schools as part of the Creator Space programme.

For NASA astronauts, however, it is used to test the safety of a site when the rocket has landed, as the VR user can control a miniature robot to explore a new site for any potential risks.

Geetika Khatri, 16, also from Rivers Academy West London, said that: “it was really cool to see the VR technology that the astronauts use, and the most amazing part was seeing how they use normal, day-to-day things that could then be used for safety reasons on missions!’’ 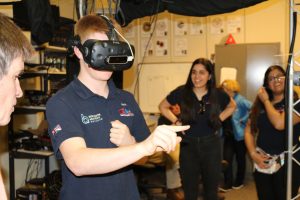