A KIND-HEARTED Portland schoolgirl with a flair for making jewellery has been using her skills to make sunflower pins to help support Ukraine.

Appalled by the scenes of bloodshed in the country following the invasion of Russia, 12-year-old Leilani Kelly, a student at Atlantic Academy Portland, found herself compelled to take action.

After discovering sunflowers are the national bloom of Ukraine, Leilani set about creating pins by using the profits from her online jewellery business.

Leilani has raised almost £80 in less than a week from the sale of sunflower pins which are sold for a minimum £1 donation and she has been supported by her peers and also the local community.

In addition to selling them at school, they are also available to buy from the Frontline Cafe on Portland and the Island Community Action (ICA) hub.

The money raised so far has been given to the charity, Help from Bournemouth to Ukraine, which has set up a donations hub at Castlepoint shopping centre. 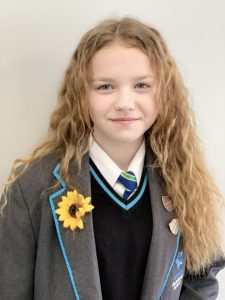 Leilani, who is in Year 7, has also donated clothes to the charity, as have her friends.

Leilani and her mother enjoy being creative and launched their online jewellery business during the first lockdown in 2020.

Leilani told the Dorset Echo: “I have watched the scenes unfolding in Ukraine on television and just feel terrible about what is happening. If I was in that situation, I would want someone to help me.

“I wanted to help in whatever way I could and when I found out the national flower of Ukraine is the sunflower I had the idea of making pins and selling them.

I’m very creative and it feels nice to be able to help by doing something I’m good at.’’ 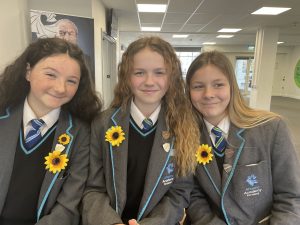 Leilani’s friends, Imogen Aldred and Grace Hawkins, who are both also 12 and in Year 7, have enjoyed helping Leilani sell her sunflower pins.

English teacher Anita Busby-Wilcocks said she was delighted with Leilani’s efforts and those of her friends.

She said: “It’s been lovely to see Leilani decide to do this on her own initiative because she was so moved by what is happening in Ukraine and wanted to do something to help.

“It’s wonderful to see the support she has from her friends. This has also been a community initiative through the support from the Frontline Cafe and ICA.’’