A student from Portland was thrilled to receive a hand-written letter from legendary naturalist and filmmaker Sir David Attenborough.

Keen environmentalist Matilda Busby-Wilcocks decided to send Sir David an animal drawing and handwritten letter to let him know how inspirational he is to her and other teenagers.

The 13-year-old, who attends Atlantic Academy on Portland, wrote: “Thank you to the moon and back for inspiring people like me more and more each day, putting the world in a new more beautiful light and highlighting the dangers of plastic.” 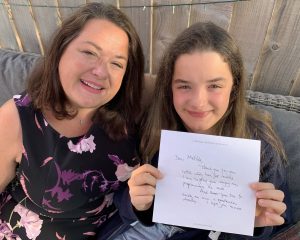 Though she did not expect a reply, Matilda received a sweet handwritten note on letter-headed paper from the 94-year-old, which said: “Dear Matilda, Thank you for your letter which has just arrived. I am so glad you enjoy my programmes so much. And thank you too for sending me such a spectacular drawing. I hope you achieve your ambition to become a marine biologist.”

Matilda told the Dorset Echo: “I was very excited to receive his letter because I didn’t think he would actually reply. I love everything David Attenborough stands for. I wanted to send the letter so he could see how inspiring he is. I think the Blue Planet series is wonderful and it has increased my ambition to be a marine biologist. I’m going to frame the letter.”

Matilda’s mother, Anita Busby-Wilcocks, added: “Taking the time to write the letter was an incredible thing for Sir David to do. He is one of our heroes.”

Lesley Bishop, Principal at Atlantic Academy secondary, said she was thrilled for Matilda: “The letter is a wonderful gesture. To receive this recognition from Sir David Attenborough, a great man at the forefront of global conservation who has done so much to change how we view and protect our environment, will have meant the world to Matilda.”

Matilda is a member of Portland 4 The Planet, an environmental youth project for students at Atlantic Academy.

Through the project students learn about the key environmental problems facing the world, including climate change, biodiversity, food, pollution and single-use plastic, but with a focus on the solutions and how they can help.