They have endured the upheaval of lockdown and the turmoil of their GCSE exams being cancelled due to the country’s battle with Covid-19 but the long wait for results finally came to an end yesterday morning on Portland.

Principal Lesley Bishop said she was ‘’incredibly proud’’ of all that students in the class of 2020 have achieved, given the obstacles faced this year.

Mrs Bishop told the Dorset Echo: “We have always been impressed by the effort our students have consistently applied, belief in themselves and commitment to their education. They have had so much taken away from them this year and we are really pleased today to be able to be given a chance to acknowledge and celebrate their achievements.

‘’As an all-through academy we have known our students for a very long time and know that they will go on to achieve many great things and I would like to wish them the very best for the future.’’ 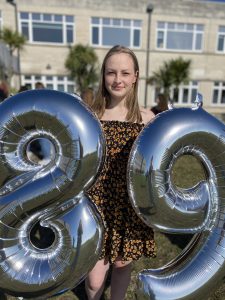 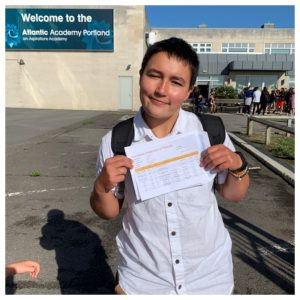 The 16-year-old has achieved 6 Grade 9s in Maths, English Language, Geography, History and two 9s in Science. She scored two grade 8s in English Literature and Further Maths and 1 grade 7 in Design & Technology.

Samanta’s academic prowess sees her follow in the footsteps of her older sister Ieva who was also the top-performing student for GCSE results at the academy two years ago.

Samanta said: “I’m happy with my grades, it feels very good. I feel a sense of relief and I’m now looking forward to going to go to breakfast with my family and the beach later with friends. I feel I got the right grades for me.’’

The teenager acknowledged it has been a difficult few months for students across the country.

She said: “I put in the work so I didn’t think I would get bad grades but it has been a really confusing time.

“The school has been very supportive and kept us up-to-date with news about GCSEs and what was happening.’’

The bright teenager, who is interested in becoming a scientist, plans to study for four A-levels in Physics, Maths, Classic Civilisation and English Literature.

His impressive GCSE grades are not just a reflection of the hard work he put in – but also his resilience, the Academy said.

Tom’s scores are testament to his determination to remain focused on his studies following his mother’s diagnosis with cancer and the upheaval of lockdown.

The 16-year-old said: “It was confusing to say the least and I was in shock when I found out I would not be sitting a final exam as I’ve worked really hard for three years. At first I thought all that work has gone down the drain and is for nothing but then it was decided that grades would be based on teacher assessments and then I knew my hard work would be taken into consideration.

Tom will now go on to pursue his plans to become an Outdoor Adventure instructor.

His mother Julia Davey said: “He was upset that he couldn’t do his exams but overall he has had lots of support from the academy and that has kept him motivated and upbeat and he kept in touch with the teachers during lockdown. School has remained his priority throughout.

“If you met Tom you would know he is very hard-working and supportive and we’re very proud of him. We’ve remained positive about my cancer diagnosis and we don’t make it a daily burden.

“Tom always gives me lots to be proud of. It takes resilience, intelligence and love to cope with everything that he has and we’re all very proud of him.’’