Ocean Academy’s Daisy Smith, 10, receives a reply from her favourite author Robin Stevens after grilling her about murder in a letter!

They are questions that would have left fictional schoolgirl detectives Daisy Wells and Hazel Wong feeling proud.

‘How do you know so much about murder?’ and ‘Are you picky about who dies and who is the murderer?’

These questions were posed by Ocean Academy pupil Daisy Smith in a letter to author Robin Stevens who is responsible for creating super sleuths Daisy and Hazel who feature in the Murder Most Unladylike book series.

And to young Daisy’s amazement, Mrs Stevens replied to her letter!

The 10-year-old penned her missive as part of the Poole school’s recent World Book Day celebrations -when she dressed up as Daisy Wells – and was stunned to receive a response from Mrs Stevens on the day.

Daisy and Hazel are the boarding school protaganists of the popular book series which is set in the 1930s at Deepdean School for Girls.

The wannabe detectives have set up their own secret detective club, the Wells and Wong detective society and solve meaningful cases.

Pictured below, Daisy’s letter and Daisy dressed as Daisy Wells. 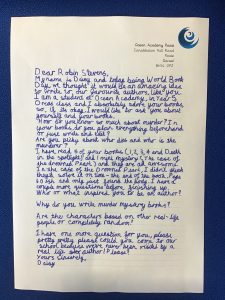 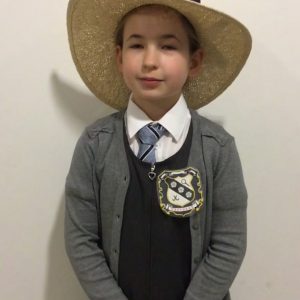 Other questions Daisy asked Mrs Stevens included: ‘’Why do you write murder mystery books and are the characters based on other real-life people or completely random?’’

In her reply, which was sent via email, Mrs Stevens thanks Daisy for her letter and tells her: ‘’I love how curious you are – just like my own Daisy and Hazel! I know a lot about murder (in books) because I read a lot about it – I use plots from other authors’ books to help me think of my own. I do make a very careful plan, and I am always careful to know exactly who did it and why before I start writing. I have a lot of sympathy for my murderer and my victim, but I know I have to kill someone off …’’

Daisy, who is pictured below with her mother Nikki,  admits she is an avid reader, has been a fan of the books for two years and is contemplating becoming a detective when she is older.

She said: ‘’Robin makes Daisy and Hazel seem really alive. I like the way in which it all fits at the end.

‘’I like Daisy more because she likes lots of sports and she’s very active.

‘’It was amazing to receive a response from my favourite author – I didn’t think she would reply. Her books have made me think it would be pretty cool to be a detective when I grow up.’

Robin Stevens is a British-American author. Since the first Murder Most Unladylike book, which won the Waterstones Children’s Book Prize in the young fiction category. There have been eight books within the series and four mini books. 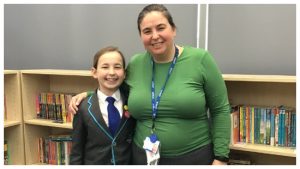