A year ago services veteran Will Williams struggled to walk 200 metres.

This week he will be taking part in an Allied Winter Sports Camp that will see him Nordic skiing, dog sledging and playing ice sledge hockey amongst a raft of other activities.

What makes his endeavour all the more remarkable is that Mr Williams, 50, is taking lifesaving Cancer Research trial drugs.

And it’s his battle with Chronic Lymphocytic Leukaemia that has prompted Mr Williams, who served in the RAF, to seize the opportunity to take part in the event.

The sports camp has been organised by Soldier On, the Canadian sister-charity of Help for Heroes and will take place in Whistler, Canada.

Mr Williams, 50, a member of the pastoral team at Bovington Academy, which is part of the Aspirations Academies Trust, told the Dorset Echo: ‘’My leukaemia is not curable and I am taking tablets that are keeping me alive.

‘’And having survived being in intensive care and being told I would not see out the hour, when the opportunity came up to take part in the sports camp, I very much thought ‘why shouldn’t I give this a go?’

‘’Yes I’m 50 and fat! But I’m having a go and I’m proving something to myself. Hopefully other people will think if he can do it, maybe I will do something too. I can’t wait to fly over to Canada and give it my all.’’ 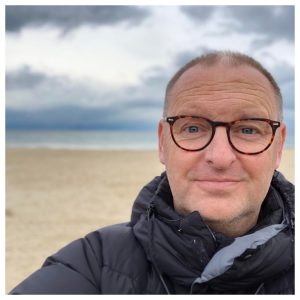 Married with two children and three small grandchildren, Mr Williams has lived in Bovington, Dorset since 1996.

He joined the Royal Air Force in 1991 and was based at RAF Chivenor in Barnstaple, Devon and during his tour he was detached to the Falkland Islands. He was then posted to RAF Laarbruch in Germany.

It was during this time that he sustained a serious back injury and underwent major spinal surgery. This led to his medical discharge from the RAF and he and his family moving back to the UK.

What followed was a difficult period of re-adjustment for Mr Williams but he eventually secured a job as a Youth & Community Officer and started a part-time degree in Youth & Community Work at Marjon University in Plymouth. 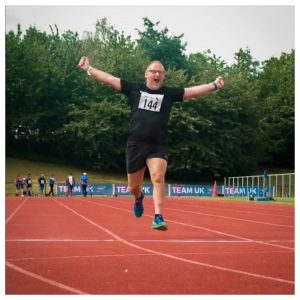 Mr Williams first got involved with Help for Heroes last year when he took part in the Invictus Trials UK 100 and 200 metre race in July, a decision he describes as ‘’life-changing’’.

Although he came last [see picture above], Mr Williams can still see the positive and said he is grateful to be back connected to the military community and to have its support. He explained: ‘’Did I come first – no – last in fact, but, was I a winner of that race – absolutely!

”For me, Invictus is about achieving individuals achieving their own personal goals. A year ago, I couldn’t walk 200 metres. Getting involved with Help for Heroes and the Invictus Games has been life-changing for me.

”Since last year I have felt so anxious about my CLL and how long I have left to live and what would happen to my family. Getting involved has given me something to focus on. Being back in the military community has been amazing.

‘’Having the support and encouragement of fellow veterans has helped me so much for my recovery. Talking to others who have endured life-changing injuries or unseen illness has allowed me to put my life in perspective. We are all in this together, we can do this, we can support each other.’’

*Soldier On 2020 Allied Winter Sports Camp takes place in Whistler, Canada from 18th – 28th February 2020. Teams Australia, US, UK and Canada will all take place. Eight have been selected to represent the UK.

*There will be a range of outdoor activities including but not limited to: Alpine Skiing or Snowboarding. Nordic Skiing, Ice Sledge Hockey, Bobsleigh & Skeleton, Zip-line and Dog sledging.