She was a teenager when she was taken from Hungary to ghettoes and internment camps in the eastern European country and then on to Auschwitz in Poland.

Susan Pollack MBE would lose her parents and 50 other members of her extended family during the Holocaust.

Having survived the Nazi death camps, Mrs Pollack embarked on a mission to educate others about the horrors she had witnessed and endured.

Mrs Pollack, 89, is now one of the last remaining Holocaust survivors and today took part in a live webcast, organised by the Holocaust Educational Trust, which was watched by Year 10 to 13 students from Magna Academy in Bournemouth.

Mrs Pollack is pictured below and the image has been supplied by the Holocaust Memorial Day Trust. 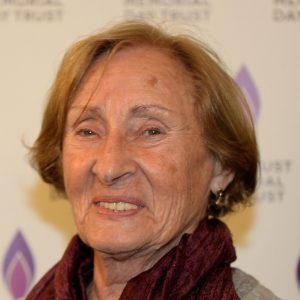 The nationwide event was hosted by actress Tracy Ann Oberman to mark Holocaust Memorial Day and to remember those who suffered under Nazi persecution and in subsequent genocides.

Magna Academy history teacher Tabitha Cook was instrumental in the school’s involvement in the event which she said provided ‘’an opportunity for students from year 10 to 13 to understand the experiences of those who suffered under Nazi persecution in a way that’s different to studying it in the classroom. Listening to a personal experience makes it more real.’’

Mrs Cook said the students were fortunate to be able to experience a live account from one of the last survivors. She said she hoped listening to Mrs Pollack would encourage students to learn from the lessons of the Holocaust and make a positive difference in their own lives.

‘’It’s eye-opening for any students to be aware of the event and Mrs Pollack was a teenager like them when she was taken away. Some of the issues from this time in history, anti-Semitism and genocide, are still happening today.’’

Several years ago Mrs Pollack, who lives in London, testified against her captors in a high profile trial of former SS guard Oskar Groning who was charged with complicity in the murder of 300,000 Jews.

Describing the moment she and her family were taken away, she told the court in Germany during the 2015 trial: ‘’I was carrying a sewing machine, believing that it might be useful and that I might be able to sustain my family…and I was still carrying the sewing machine to the cattle trains. Somehow we were still hopeful. We couldn’t imagine what was to come.’’ 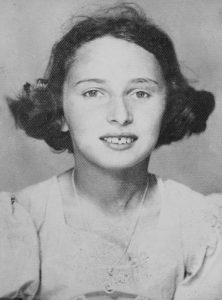 After an estimated five-day journey, the doors of the train opened and Mrs Pollack (pictured above in an image from her younger days supplied by CST) recalled: ‘’The terror stills my soul. On arrival it was like the terror that stops faculties of thinking. I couldn’t think. This was a world that was unrecognisable. The terror just seized me up.’’

Mrs Pollack told the court she was separated from her family and taken with hundreds of other girls and young women to be stripped and to have their heads shaved.

Mrs Pollack said she was placed in a barrack with 800 other girls and told the court it was during this time that the notorious Nazi doctor Josef Mengele, examined the group every day making selections of some girls for his experiments while leaving the others.