From fine dining to cafes, students at Rivers Academy West London recently ignited their entrepreneurial spirit for launching places to eat – and impressed some of the most respected experts in the industry along the way.

The Year 8 business proposals were critiqued by bosses at Euro Foods, one of the biggest suppliers of Asian food in the UK and Europe. The business has a yearly turnover of £200m and founder Shelim Hussain MBE recently appeared on ITV series The Undercover Boss.

Amar Sagoo, Head of Retail Sales at Euro Foods and Ikbal Hussain, Head of Design at Euro Foods, spent the morning with students at the school which is based in Feltham and is part of the Aspirations Academies Trust.

The food assignment is an example of the No Limits Curriculum in place for Year 7 and Year 8 pupils and unique to Aspirations. It involves students applying what they have learnt in the classroom to real-world projects that cross disciplines, known as Applied Transdisciplinary Learning (ATL). Teamwork and presentations are key aspects of ATL. 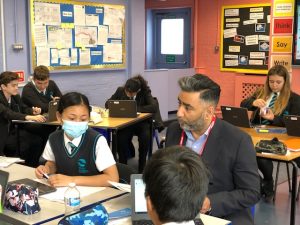 The food and restaurant projects saw students split into groups and apply learning from subject areas including Business Studies, English, Geography and PHSE.

Mr Sagoo used his expertise to focus on the business plans devised by the students and offered his best tips and ideas to boost profit margin. Mr Hussain used his creative eye for design to focus on the logos and colour schemes used to entice customers through the doors.

Student highlights included ideas for food trucks, cafes, fine dining restaurants and one group of students even devised a ‘study buddy’ cafe they thought could serve as a hub for teenagers to socialise and do homework. 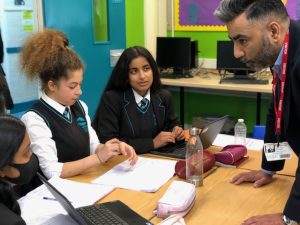 Mr Sagoo and Mr Hussain said they were very impressed with the level of work produced by the students.

Mr Sagoo told the Hounslow Herald: ‘‘There was good collaboration and the students did not speak over one another when explaining their ideas. They worked really well together in their teams.

‘‘There were a lot of good ideas, the students were sharp and a lot of thought had gone into the projects. I was particularly impressed with the ideas for food trucks. We definitely spotted some budding restaurateurs!’’

Principal Andria Singlehurst said: ‘‘We were delighted to welcome Mr Sagoo and Mr Hussain from Euro Foods to work so closely with our Year 8 future business leaders at Rivers Academy. Their incredible industry expertise benefitted students immensely. Students were keen to present their detailed plans and thrived on the critique from Mr Sagoo and Mr Hussain.’’

Prerna Patel, No Limits Curriculum Lead at Aspirations Academies Trust, said: “Pupils greatly benefitted from the expert advice they were given by specialists in the food industry. What amazed me was that pupils were fully engaged in receiving feedback and immediately implemented the advice, to improve the quality of their business proposals. Great to see a real life transdisciplinary assignment in action!”