Fantastic Freya is front page news! 6-year-old has 15 INCHES of hair cut off to help children with cancer after growing it from age 4

She is only six-years-old and 4ft tall.

But Freya Thurlow has already proven she has a big heart filled with empathy and for someone so young, has bags of patience and dedication too.

For Freya has spent the past two years growing out her hair so that her long auburn locks can be turned into a wig to help children through the charity Little Princess Trust.

The 15 inches of hair Freya had cut off during a recent school assembly at Bovington Academy measures more than a quarter of her total height. Her act of kindness earned her a place on the front page of the Dorset Echo. 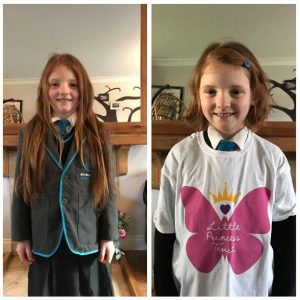 Freya made her decision to help other children after a chance encounter with a family friend two years ago at Dorchester Carnival.

Then just four-years-old, Freya noticed the teenage girl had had her hair cut very short and started asking lots of questions about why.

After learning the hair had been donated to charity Little Princess Trust to be turned into wigs for children with cancer, Freya decided she wanted to do the same.

A spokesperson for the organisation said Freya’s 15 inches of hair was a huge achievement because it is a length that is rare to receive due to the time and effort taken to grow it that long. Freya is pictured below aged 4, shortly before she started her challenge. 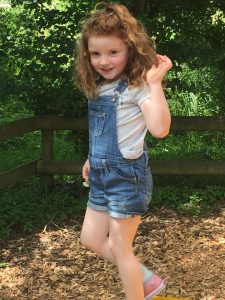 Freya, who attends Bovington Academy which is based near Wareham, finally had her Rapunzel-style locks chopped off by a local hairdresser during a school assembly earlier this week.

Describing the moment, Freya told the Dorset Echo: ‘’I was a bit excited and a bit nervous.

‘’But I really wanted to help children with cancer because the medicine they take makes their hair fall out.

‘’I really like my new hair, I think it makes me look grown up!’’

She said the family fundraise a lot and last Christmas she revealed Freya asked for her main present to be a donation to the World Wildlife Fund to sponsor a leopard.

The youngster has also taken part in fun runs to raise money for the Weldmar Hospice in Dorset.

Ms Regan, said: ‘’Freya has always been a very empathetic child. We are a family that talks about things and when we explained what the cancer treatment does, Freya said she wanted to support the Little Princess Trust.

‘’I am extremely proud of Freya. She’s an absolute champ and she took it all in her stride.

‘’She’s quite a shy child and it’s been lovely to see her overcome that by doing something so public.’’ 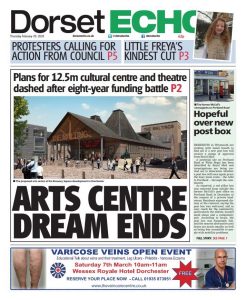 In addition to donating her hair, Freya also raised £500 for the charity by organising a name the fuzzy fox competition and also sold tickets for a £1 to encourage people to guess the number of sweets in a jar.

Sharon Reddyhoff, Assistant Principal at Bovington Academy, which is part of the Aspirations Academies Trust, said: ‘’Freya’s gesture is an absolutely lovely thing to do and a great act of kindness. For a little girl to think of wanting to help children who have lost their hair through illness, I hope she inspires other young people to think of ways they can help other people.’’ 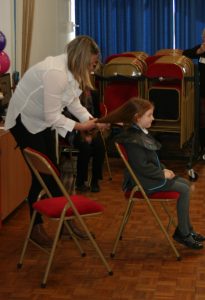 Since the charity’s launch in 2006, over 8,000 wigs have been provided and grants of over £5million given to childhood cancer research.

In 2012 the charity received the Queen’s Award for Voluntary Service.

A spokesperson for the Little Princess Trust said: ‘’We think that Freya is absolutely AMAZING! To donate such a lot of hair at such a young age is a huge achievement.

‘’We are desperate for hair donations that are 12 inches or longer, as these lengths are used to make our longer hair wigs.

”Four inches of hair can be used in the knotting process when a wig is made. So a 7-inch long hair donation would result in a 3-inch long wig.

”There is significantly greater demand for long wigs yet the longer hair donations are the rarest that we receive.

‘’For Freya to have committed to growing her hair from the age of 4, until she was in a position to donate 15-inches of beautiful hair, is simply incredible and she should feel very proud of herself. We are hugely grateful for her support.’’