After reading numerous reports and headlines about the rise of child poverty, students decided to help make a positive contribution to the Hillingdon community their school serves.

Around 150 students collected a range of products, over a period of three weeks, from other pupils or staff.

Items included tins of soup, cereals, toiletries, nappies, washing up liquid and all have now been handed to the Yiewsley and West Drayton Food Bank. 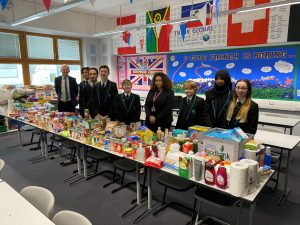 Teacher Ryan West, co-ordinator of Modern Foreign Languages, instigated the collection and said he was proud of the efforts of the pupils who took part.

He told the Hillingdon Times: ‘’Our students care passionately about social issues and they are often the subject of their debates and discussions.

‘’I decided it was time to see their commitment to wanting to change society for the better in action and to help support their community.

‘’Educating them about the importance of food banks was an eye opener for many of them.

‘’They are not just there for the poorest families but for those that fall short for a few days every month and the children of those families could be pupils that are in their classes or in school. Often we don’t know who around us needs help.’’

Students from year 7 to 11 were given a target of putting together 300 items. In the end they collected 467 donations. Some 90 plastic bags were also donated as those who visit food banks often don’t want to be seen leaving with a food bank bag.

Mr West added: ‘’I’m very proud of the students and their achievement.’’