He has become a household name after six years on smash hit Ch 4 show Gogglebox.

So who better to encourage students to come up with the next must-watch show than Baasit Siddiqui.

A member of the Gogglebox family ‘’the Siddiquis’’, he is also a qualified secondary school and sixth form teacher and sprinkled some of his TV sparkle on students at Atlantic Academy when he arrived to host his Let’s Pitch It workshop.

Pupils were split into groups of three and encouraged to work with Mr Siddiqui to come up with ideas for a TV show and then produce a pitch for it. 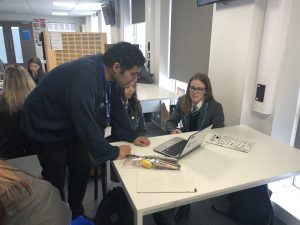 The groups are continuing to work on their pitches, which will include a show reel, and the  best suggestions sent to Mr Siddiqui and his team later this year.

A final three are eventually sent to Tania Alexander, creator and maker of Gogglebox, who will decide on the overall competition winners. These students will then be invited to London to see how Gogglebox is edited, along with additional prizes for them and their school.

Providing his thoughts on his Atlantic Academy visit, Mr Siddiqui, who is a former school head of Information & Communication Technology, told the Dorset Echo: ‘’I could see the students were switched on and focused on the workshop, they asked questions and it’s a sign that these kids have high aspirations, if they are that engaged and taking it seriously. It means they take their education seriously.

‘’I had an entire year group of around 70 students each day and we got so much work out of them because they were engaged and focused. It’s the little things that kids do that mean a lot – so many of them came up afterwards to say how much they enjoyed the workshop.’’ 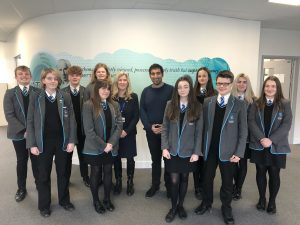 Mr Siddiqui formed his education company and the idea for the workshop two years ago in order to continue his passion for teaching and also maintain his Gogglebox commitments.

The programme targets disadvantaged students – Weymouth and Portland are classed as the third most disadvantaged local authority in England.

The aim is to build the confidence and aspirations of the students and provide them with skills that are of value in the world of work – qualities that chime with the ethos of Atlantic Academy, which is part of the Aspirations Academies Trust.

Mr Siddiqui explained: ‘’Children like competition so it was another way of getting these kids to be engaged.

‘’Kids are also fantastic at learning when they know why they are doing something. The workshop is linked to the world of work: people need to work together to get a solution and the children learn the importance of compromising. It can also be difficult to share ideas or to see them rejected and for them to be able to get past that. The workshop helps to build resilience.’’

Tasha Board, Head of Careers at Atlantic Academy, organised Mr Siddiqui’s visit to the school and said: ‘’The students have been brilliant. Some of the best ideas often come from students who live in deprived areas because they’ve learnt to be creative and resourceful from a young age. Baasit’s visit has given the students an opportunity to access things they need to learn from the curriculum in a different way and they have loved it.’’ 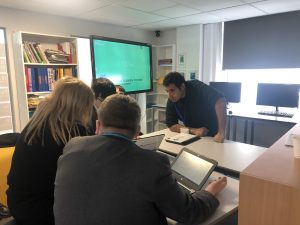