They may be more familiar with playing to wild crowds at large venues, but for one day only, rock band Bad Solution wowed pupils at Oak Hill Academy.

The band which performs a mix of hard rock and metal performed some of their own original music, while also covering hit songs such as Good Riddance (Time of Your Life) by Green Day, and a rock version of Christmas favourite ‘Hallelujah’.

This was a particularly significant part of their mini-concert, as the Year 4 students had been learning the lyrics to the song, and sang along with the band. Lead vocalist Paul Kennedy even claimed that the students were “better at remembering the lyrics than me!”

Bad Solution’s visit to the west London school which is part of the Aspirations Academies Trust tied in perfectly with the ‘No Limits’ curriculum task titled Rock Band.

Rock Band is an interdisciplinary project comprising of science, music, Design & Technology, English and computing. It involved students creating their own bands with logos, advertising and even composition for music.

The Rock Band ‘No Limits’ project aims to teach students skills such as communication, collaboration, productivity and accountability. It culminated with Bad Solution coming into the school to divulge the realities of being in a band. Mr Chojnowski agreed to come in and perform with his band as his daughter attends the school and made him aware of what she and her peers were doing. 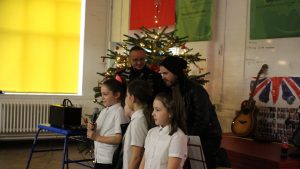 Between songs, the students had the opportunity to ask the band members their own questions about what it is really like to be in a rock band! Students asked the band members about the history of the band, how easy it was to learn their instruments, the process of writing and recording songs, and what life is like on tour.

The band also offered some great advice to the students, when asked if they have ever made mistakes on stage, Mr Kennedy replied: “Yes, loads! You just have to style it out. It’s one of those things, you just keep going and don’t stop and hope that nobody noticed. Usually, nobody notices because you have acted like everything is fine”.

“We can make money from being in the band, but it isn’t a job. We love writing and performing” Mr Chojnowski said, stating that if you love the work that you do, then it doesn’t even feel like working.

A lasting comment from the band is urging students to learn to play an instrument:

“Although it is never too late to learn, it is easier to pick these things up while you are still young. Find an instrument that you like to play, or have a passion for, and you will master it very quickly!”

The band also commented on how the music industry is changing and will be totally different when the year 4 students become older. In terms of publicising their shows and merchandise, the band highlighted the importance of social media and the digital marketing of music, which has changed the industry completely.

The students played an active role in the concert, signing and clapping along with the band, and enjoyed watching the things that they have learned in their ‘No Limits’ live in action, as the bands members provided a great experience for the Year 4 pupils.