“I heard a scream and then it went dead quiet”: NASA engineer reveals the horrific moment the Apollo 1 project ended in disaster

A former NASA engineer who worked on the Apollo 1 project and witnessed the crucial moments before the capsule turned into a fireball has revealed the horror of what we watched has never left him.

John Tribe also revealed the pivotal role Velcro played in the capsule turning into a “fireball within seconds”.

The tragedy saw astronauts Gus Grissom, Ed White and Roger Chaffee all sadly lose their lives during a rehearsal test for the inaugural flight at Cape Kennedy Air Force Station in 1967.

Their goal, under the United States Apollo Program, had been to be the first men to land on the moon, but the mission never flew.

Now John Tribe, 84, who enjoyed an illustrious career at NASA and was working on the Apollo 1 project at the time, has provided a first-hand account of what happened that day.

He disclosed how Velcro, which was then considered a vital feature of the spacecraft interior because it is not affected by zero gravity, played a crucial role in the tragedy that ensued.

Describing the fateful day 52 years ago, Mr Tribe, who was speaking to a group of Aspirations Academies Trust students from England on a visit to NASA, said: “That was my first experience with anything like that. It was very traumatic. 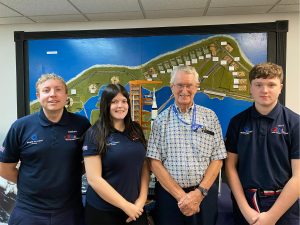 “We were running a test called a simulated static fire, and it had been a very long day, everyone was tired and Gus was pretty grumpy. Because of this, the test conductor suggested to take a hold [pause].

“During that quiet period while we were holding, I heard a guy say ‘FIRE! You got a fire in the cockpit!’ and I looked around at the guy next to me and thought ‘what the hell is he on about?’”

“I heard a scream and then it went dead quiet. Those three guys were dead.” He told the Year 12 students.

“We don’t really know what happened. All that we know is that a spark occurred down by
the side of his [Gus Grissom] couch, and that spark had flashed on to all the Velcro that was over that capsule” Tribe explained.

During this period of time, Velcro was a vital feature of spacecraft interior: “The astronauts had found out that if you stick Velcro up everywhere, you don’t have a problem in zero gravity with finding things – pens, anything else you work with – you can just stick it up on the Velcro and it will stay there!”

“The problem is that Velcro is flammable. In 100% oxygen, at 16 PSIA, it is almost like a
bomb going off. When something ignites, it doesn’t just start burning, it flashes right across everything that is flammable and soaked in oxygen. The inside of that capsule became a fireball within seconds.”

Mr Tribe went on to work on several more Apollo missions in the decade that followed and said being a part of Apollo 8 was one of the highlights of his career: “We thought [after Apollo 1] the programme was probably going to die on the vine. We thought the nation would never support it again. But they did!”

“We went on that same year to launch the first Saturn V, and then the following year, we
launched Apollo 7, and then in December 1968, we launched Apollo 8, which went all the
way to the moon. That was such a huge step.”

Mr Tribe was speaking to the Aspirations students at the American Space Museum &amp; Walk of Fame in Titusville, Florida.

The selected students from various Sixth Form’s across the Trust were on the Florida-leg of their prestigious trip to the United States to visit significant sites from the past and the future of space exploration.

Many of the students on the trip are looking to work in the space industry in the future and many aspire to work for NASA. 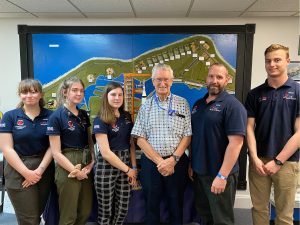 Mr Tribe was born and raised on the South Coast of England and joined The de Havilland
Aircraft Company as an engineer, after his Royal Air Force career did not go to plan.

However, it was not long before his career at the firm came to an end and he found himself travelling to the US to NASA and a new life.

“Politics came into the picture and the British space programme was essentially cancelled, so I wrote to the Base manager [at NASA] out of the blue and said: ‘hey, can you offer me a job?’”

Tribe said: “He took me under his wing. I was sea-sick for four days on the old Queen Mary ship across the Atlantic, in the worst week of the year for weather. I arrived in New York with no money, got to Florida, and they told me: you are a propulsion engineer.”

Tribe learned everything there was to know about the propulsion system, and immediately started conducting tests on the Atlas rocket, as NASA began preparations to fly to the moon on the first Ranger programme.

The British propulsion engineer was in the middle of a rescue mission for the Atlas rocket, as it had become evident that the water tank had been over-pressurised, which had compromised the tank diaphragm; a potential disaster for the mission.

It was then that Tribe and his team had to take the entire back-end of the Atlas apart and put it back together within three days. British tabloids splashed headlines like ‘Englishman Saves Space Programme!’, which Tribe modestly rejects, as he maintains that as with anything at NASA, it was a collaborative team effort.

Tribe was a key Briton in the American space adventure, and his nationality shone through often: “You could spot me from a mile off. Being an Englishman, I was the only person in the whole state to be driving a little red MINI!”