‘I’m head of my children’s school – and I love it’: Oak Hill’s Rachael Saim reveals why this is a scenario she engineered to become reality

This article was originally published by the Tes

Would you want to work at your children’s school? Rachael Saim at Oak Hill Academy says she always wanted to be her daughters’ headteacher. 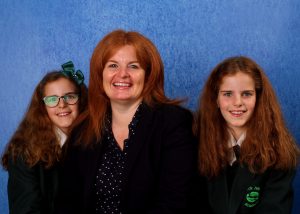 The drive home with my daughters at the end of the school day is not just a chance for me to hear all about their day: it’s also when I find out just how happy the pupils at my school really are.

This is because I’m not just a mother to my twins, Aisha and Samira, who are both 10. I am also their principal. Which means my girls often act as unofficial student ambassadors.

It’s not unusual, during these journeys, for my girls to pass on requests for school improvements or messages from other children in the school.

I’m sure some headteachers or senior leaders will have dismissed the idea of working at the schools that their children attend, thinking that it would be unworkable or a stress they could do without.

But this isn’t just a scenario that I’m happy with – it’s one I engineered to turn into a reality many years ago.

Being my children’s headteacher

When my twins were three months old, I created a five-year action plan to get to headship.

I set myself milestones, which included tasks such as completing a local Aspiring Leaders course, upskilling myself in FFT and Ofsted, and obtaining my National Professional Qualification for Headship (NPQH).

I returned to work as a deputy head at Oak Hill full-time after four months of maternity leave, and I have never regretted it. I was determined to make my plan work.

My action plan finally came to fruition and I became principal six years after having my twins.

Within five months in my new role, Ofsted visited and our school shifted from a “requires improvement” rating to “good” with outstanding features, which was a great day for us all.

As Oak Hill is a junior school, the girls did not join until 2017 for the start of Year 3 in key stage 2.

Shortly before they did, I had to explain to them what it means when I become their “work mummy”.

I had to make it clear that there would be no favouritism and I would remain neutral so that it’s fair to all the children at the school, and they understood that.

This also means I consciously keep out of any issues that involve my children and delegate to other senior and middle leader staff to manage.

For example, during Year 4 a group of girls had a minor friendship issue, which included one of my daughters. The year team leader dealt with it and I was informed of the outcome.

I always try and make it clear to staff whether I am wearing my mum hat or my principal hat, and this reassures staff that I am approachable, even when tricky conversations may involve my own children.

On another occasion, one daughter was not taking her maths lesson seriously and her teacher spoke to me about it. I fully supported her in managing her behaviour choice effectively using our school behaviour policy.

Of course, despite treating them the same as all the other pupils, I can’t deny that I feel much more emotionally fulfilled because they are near me: I can watch them from afar and keep an eye on them and I know the quality of education that they are receiving is outstanding, because I’m in control of that.

This also translates into ensuring that the quality of education I want for my own children applies to all children at the school.

The other benefit, as my post-school car rides attest to, is that my children are honest, helpful and insightful ambassadors for their fellow pupils’ thoughts on school life.

They pass on improvement suggestions, such as adding soup and a roll to the lunch menu. We trialled it initially and it has proven popular, especially in the colder months.

One of my daughters loves technology and creates the PowerPoint for my weekly assemblies. We discuss the theme for the next week in the car on the way home every Friday night and she sets to making the presentations, which her friends are also now having input into.

The girls were also the reason for reopening a new and improved extended daycare provision at Oak Hill called Acorns to Oaks (fondly referred to as A2O).

There was a huge need for a quality breakfast and after-school club for working parents, vulnerable pupils and staff children. It is a massive success and we now have about 55 children per night sitting down to a hot cooked meal at 5pm.

All in all, having my daughters in school is something I love and I feel it only adds to my ability to be an effective leader for the benefit of everyone.

I feel very lucky to be the principal here.