Jewell & Ocean enjoy a celebration of Books and Stories, with Bournemouth University, to help boost reading age of pupils by up to 15 months

Sitting down with a book is now a pleasure rather than a chore for a group of once reluctant young readers.

The transformation is the result of a collaboration with Bournemouth University and two local schools within the Aspirations Academies Trust.

A selection of 10 pupils from Year 6 at Ocean Academy and another group of 10 from Jewell, both located in Bournemouth, were chosen to take part in a Stories and Books project to improve their reading age during the course of a term.

The Books and Stories initiative was launched at Ocean and Jewell in September last year and officially brought to a close with a reading graduation ceremony, complete with mortar boards and gowns, earlier this month.

The children taking part were given a test to assess their reading age at the start of term and another assessment at the end.

The data is currently being analysed but based on the results of last year’s group, reading age improved by 15 months.

Each week a Student Ambassador from Bournemouth University spent an hour with the children on a range of activities to improve comprehension, decoding of literature and boost confidence levels when tackling works of fiction.

They included reading a book one week followed by another week where the children were taken on a bug hunt to think about the characters in the book Beetle Boy.

A creative writing workshop was also hosted by author of The Middler, Kirsty Applebaum.

Jon Lee, a Year 6 leader at Ocean Academy, said the difference in the children chosen to take part has been impressive. He said: ‘’It has enthused them and given them a love of reading literature.’’

As part of the initiative, a tour was also given of Bournemouth University to inspire the children.

Mr Lee said the visit had been an eye-opener for the pupils: ‘’It’s something they would never have seen before. They had student ambassadors who were inspiring and they were told about all the different courses on offer from games design to film-making with the idea being to put it in their minds that this is something that they can do and aspire to.’’ 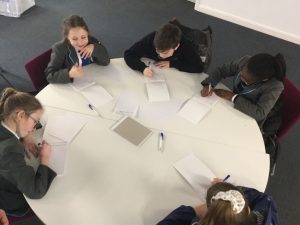