Learn-and-dine sessions with NASA interns: Careers advice given while enjoying Chinese buffet a highlight of trip for Aspirations Sixth Formers

For the Aspirations students chosen to fly out to NASA space centers in the USA, it was a trip-of-a-lifetime.

Now back at school and able to reflect upon the opportunities they were given, the students are in agreement that the learn-and-dine sessions with people working across NASA were a highlight of their special fortnight.

At the point that most people may be enjoying some down time after a busy day, the
students are given the opportunity to dine with professionals that live and work within the organisation of NASA in varying career paths and levels of progression. Some had only been there a few weeks; some had been working for NASA for over five years. 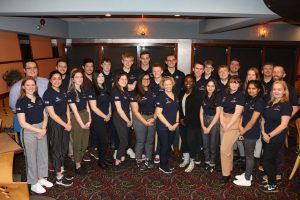 This allowed the pupils to gain a better understanding of the process of applying to work for an organisation such as NASA, and the reality of day-to-day careers in an informal setting, outside of the intern’s workplaces.

During a meal at a Chinese buffet restaurant in Houston, Ryan Francis, 17, was able to speak to a Computer Science intern at Johnson Space Center, which is the field that Ryan would like to study in at university and eventually have a career in.

“I asked a computer science intern about what languages and computer programming I
should learn early. I have a particular interest in virtual reality, so it was illuminating to
discover what sort of things NASA are doing in VR at the moment, as I am currently
undertaking my EPQ (Extended Project Qualification) on the topic, so this was particularly rewarding.” Ryan said. 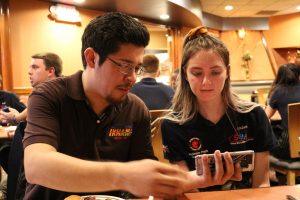 Being able to ask for that vital advice from somebody who is already in a successful career is incredibly valuable for Ryan, especially considering his age and ambitions for the future.

Luke van Eldik, 17, who hopes to study and work in Aerospace Engineering, said: “I thought the evenings with the interns were extremely helpful and inspiring. The casual atmosphere of speaking at dinner made it very easy to ask about a wide range of topics from what they are currently doing at NASA to questions about American culture. I was extremely inspired by one intern called Erick who had worked on a multitude of projects at NASA which I found very inspiring!” 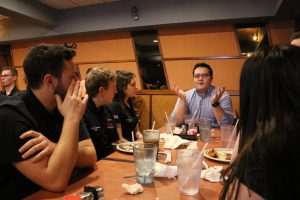 The students took an active interest in all aspects of the intern’s lives, including the kind of work-life balance that is available whilst working at NASA and opportunities to combine pursuing hobbies with their work.

Furthermore, listening to the stories of the interns raised a very important point about the progression of academic and professional careers; reinforcing the notion that it is not a strict, linear journey. Instead, the NASA professionals explained the importance of being open-minded and allowing yourself to grow professionally. 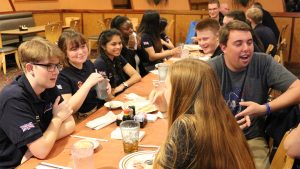 Suvarunika Thirumaran, 16, found this particularly insightful: “One of the most inspiring
interns that I met was Victor Yu who was really aspirational in how he discovered his pathway to NASA. He studied Mechanical Engineering but his love of Astrodynamics led him to NASA.”

“This has led me to also believe that no matter what sort of education I have to get into, I
will be able to pursue the career I love if put my mind to it” she added.