It was the sound of the plane’s engine that prompted student Liam Cockwell, a keen
photographer, to look upwards.

And what he saw was a picture perfect opportunity to capture a sense of hope as lockdown restrictions eased: the sun blazing through a bright blue sky, a white trail left behind by the plane and a rainbow rising from the side.

Liam, a 15-year-old student at Magna Academy in Poole, was delighted with the fleeting image he managed to snap and submitted it to a lockdown picture project launched by Rankin.

The celebrity photographer loved Liam’s image so much he has shortlisted it. It will now feature in an episode of his show which airs on the Sky Arts channel on October 27 th. Liam’s image is one of 400 to end up in the series – a tremendous feat given he was one of 21,600 entries. 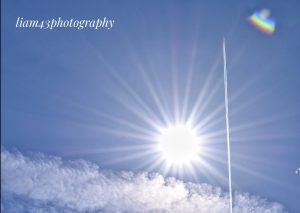 The aviation industry has suffered catastrophic economic damage as a result of COVID-19 with flights grounded and jobs slashed.

Liam explained the sound and sight of the plane, seen as lockdown restrictions were relaxed in July, suddenly had greater significance.

He told the Bournemouth Echo: ‘’The image was taken during the summer holidays during a staycation as I walked through a country park in Wales. To see a plane in the sky felt like the start of something. There was a rainbow coming out of the side and as I edited the photo later I could see how nice it looked. It feels really good to be shortlisted for the Rankin project and I’m really happy about it.’’ 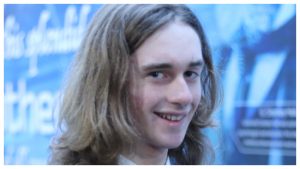 Rankin launched his mass Sky Arts picture project to mark the upheaval of 2020. Best known for shooting celebrities and royalty, including David Bowie, Kate Moss & the Queen, the star photographer launched his campaign to encourage amateurs and professionals to share a snap that represents their 2020.

With six parts to the series, each episode of Rankin’s 2020 will focus on a different category – family, fun, self, beauty, empathy, and nature – this is the category in which Liam’s image will feature.

Liam credits Katie Munro, who is providing maternity cover as Head of Art & Photography at Magna, with encouraging him to develop his passion for photography.

Ms Munro said she was delighted with his achievement: ‘’When Liam told me he had been selected for Rankin 2020 I was over the moon for him and gobsmacked! I was pleased that he had been pursuing his photography.
‘’Liam was able to document his image with such clarity. It’s poignant and a reflection of the times we’re living in at the moment.’’