THE weeks of uncertainty ended yesterday morning for A-level students at Park Academy in Uxbridge – and it was a cause for celebration!

Results were a marked improvement on last year’s when the average grade achieved was a D+ This year, it has jumped to a C+.

In vocational subjects a similar trend was evident with last year’s average grade of Merit being replaced by one of Distinction.

This year, the Park View Road school was taken out of special measures following a two-year transformation. 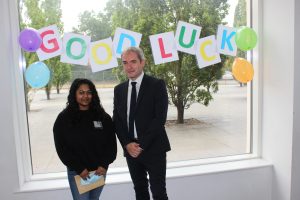 Principal Juan Delgado and his staff have worked to turn the school around and this year’s results are a reflection of the improvements made.

Mr Delgado told the Hillingdon Times: “This year’s A-level results reflect all the work that has been done to raise the expectations and aspirations of the school and instill a belief in the students that they can achieve.”

Sabrina Begum (pictured above with Juan Delgado and below) was predicted an A for Chemistry, A for Biology and A* for Maths.

She achieved three top A grades and will now be heading to UCL to study Chemical Engineering.

She said: “I took 40 minutes to open up my UCAS track this morning because I was so scared.’’

Sabrina’s father works in a restaurant and she has a stay-at-home mother. The teenager, who has younger siblings, is the first in her family to go to university.

She said: “It has been a nerve-racking time, even though I did well in my mock exams and coursework, I was still worried my marks would be downgraded.”

Park Academy is part of the Aspirations Academies Trust, and every year sixth-form students from across the trust are selected to go on a week-long trip to NASA.

It was this trip that inspired Sabrina to follow a path in engineering and eventually she would like to work for the space organisation. 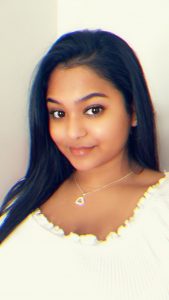