Rice University is where former President JF Kennedy declared to the world that he wanted the United States of America to become ‘’the world’s greatest space-faring nation.’’

The esteemed establishment in Houston is where Aspirations Academies Trust students found themselves earlier this week to attend an astrophysics lecture by Professor David Alexander OBE.

Professor Alexander delivered a lecture titled “The Space Physics of Star Planet Interactions” regarding the habitability of exoplanets across outer space and revealed exciting new areas of investigation. 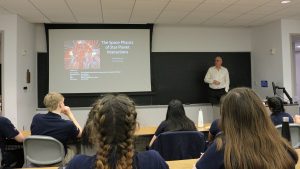 To evaluate this, Prof Alexander and his team are using the Sun Earth magnetosphere model to develop a programme that will allow the astronomers and physicists to input data from exoplanets and their parent stars to assess potential for habitability.

Previously, the main area of research for this was simply the position of the planet from the star in terms of distance.

The students heard from Professor Alexander why the main factor could now be the planets magnetosphere and how the parent star interacts with this, and the planets position within the Stars Alvén stream. These are concepts that are being developed as part of a new area of research.

The academic is Director of the Rice Space Institute and his research exploring solar physics, exoplanetary physics and earth remote sensing have been recognised by Her Majesty the Queen.

The students were left very impressed by Professor Alexander’s lecture.

Martha Brown, 17, from Budmouth Academy, was grateful for the manner of which he delivered his lecture: “I am really happy that he simplified the topic for us and didn’t use too much physicist jargon as it made the discussion really accessible for us.” 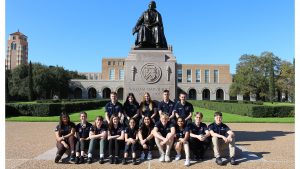 Martha also added that visiting the university “was a great opportunity to broaden my horizons and has made me consider studying abroad at some point in my academic career.”

Henry Bell, 18, from Budmouth Academy, Weymouth, said: “Being in a physics lecture has stimulated my excitement for when I study physics at university, and being lectured by Professor Alexander was inspiring because he is so passionate about the field, which is demonstrated by his desire to not only continue learning, but to contribute to the advancement of the discipline by educating future physicists.’’

The visit began with a tour of the university grounds, which left students and staff alike mesmerised by the stunning architecture and fascinating landscapes.

The tour guide detailed the rich history that has been the foundations for such an impressive campus, with some buildings dating back to over a hundred years. 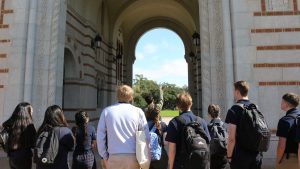 Daniel Lane, 16, also from Budmouth Academy, said that he doesn’t study physics in Sixth Form, but was particularly illuminated by the lecture: “What I found most interesting is the magnets and greenhouse gases that are required to protect the atmosphere, which ensures that life can survive.”

After the visit to Rice University, the students stopped at the Houston Museum of Natural History, where they watched a presentation in the Burke Baker Planetarium.

Named ‘Unseen Universe’ it displayed a cosmic drama playing in the heavens above, with scenes and characters previously unseen by humankind. The entire group was amazed by the beauty of the shapes and colours of the cosmos.

The day came following an evening spent with young people interning at NASA in Houston, from varying backgrounds and job roles across the industry. They were able to network with the professionals and discuss their career trajectory and receive any guidance or advice from them, which some considered very valuable.

Ryan Francis, 17, from Space Studio West London said: “I asked a computer science intern about what languages and computer programming I should learn early. I have a particular interest in virtual reality, so it was illuminating to discover what sort of things NASA are doing in VR at the moment, as I am currently undertaking my EPQ (Extended Project Qualification) on the topic, so this was particularly rewarding.” 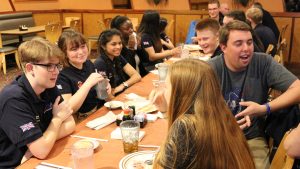