No stodgy or dodgy school dinners for our students at Budmouth Academy! School’s chef scoops third place in competition

A WEYMOUTH school chef is among the best in the country after a fierce cook-off in the kitchen.

Rob Finch was awarded £300 and the third place accolade in this year’s School Chef of the Year awards held by LACA, a body representing catering managers in local authorities, private contractors, schools and academies.

Rob, a chef at Budmouth Academy, competed against 10 other top school chefs to see who would be crowned the chef of the year at the national finals in Birmingham.. The chefs were tasked with preparing, cooking and serving two courses suitable for serving in primary and secondary schools in 90 minutes and with spending a maximum of just £1.40 on ingredients.

Competitors had to include Quorn – which sponsored the event – as the protein element of the main course and a dessert based on 50 per cent fruit content. Four portions each of their main course and dessert had to be presented at the end of the cooking time. 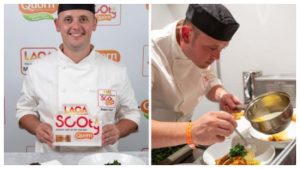 Rob, who was the South West of England regional finalist, impressed judges with his main course dish of chipotle and honey roasted Quorn with root vegetables, fondant potato and tomato beurre blanc. He followed that up with a raspberry and chocolate pudding dessert, served with a berry compote and frozen yoghurt.

Stephen Forster, LACA national chair, told the Dorset Echo: “Over the 20 years since this competition began, it has evolved to reflect both school food standards and food trends.

“Our partnership this year with Quorn reflects the current shift to reduce the amount of meat in our diet which is also emerging as a major feature of school menus.

“As children and young people become more environmentally aware and healthier eating aware, they are demanding more meat-free choices on their school menus.

“Our link with Quorn has allowed our amazing school chefs to respond to this trend whilst showing off their culinary expertise, which all of our competitors have done in abundance at this year’s national final.”

“We want to inspire future generations to eat healthily and establish sustainable eating habits by educating them on how their food choices can be both good for their health and the planet.

“We have been thrilled to see the amazing creativity of school chefs using Quorn. Well done to all of the competitors in the School Chef of the Year 2021.”