Oriel Academy pupils of all ages have participated in a cross-curricular project which could see their work featured in the National Gallery’s annual Take One Picture exhibition.

Take One Picture, a scheme ran by the National Gallery since 1995, invites primary school children across the United Kingdom to focus on a painting from their collection, and respond creatively to its themes and subject matter, historical context or composition.

This year’s featured painting was ‘The Battle of San Romano’ (below), a 15th century painting by Paolo Uccello, and because of the partial closure that remains in place at the academy, pupils contributed both from home and from within their bubbles on-site. 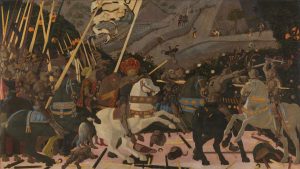 Paintings for the scheme are selected as they are works of art which the Gallery can see have the potential for a large range of creative responses.

Kristina Bikauskaite, Reception class teacher and Oriel’s Art Co-ordinator, has ran the programme at the academy for the last three years and is consistently impressed by the academy-wide response to the project.

She said: “I love organising Take One Picture at Oriel Academy, it is a great way for the pupils to think creatively and for us to see the different ways that children respond to one painting.

“The project promotes cross-curricular work, to make meaningful connections between different aspects of their life, and also helps to build their self-esteem.”

The children’s work is currently being displayed in the academy’s Main Hall as an exhibition, whereby everyone on-site is able to visit and look at the different responses that different year groups had to the picture. 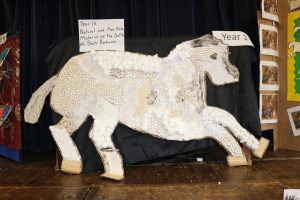 Each piece of work is also being uploaded to Google Classroom so that children that are at home also have the opportunity to admire the work that has been completed.

The celebration of the work produced during Art Week is important for the pupils’ self-belief and the confidence that they have in their abilities.

In normal circumstances, the Take One Picture project is a key part of a wider ‘Art Week’ that the academy hosts, where students are encouraged to be creative and produce mesmerising pieces of art, drawing influence from different themes and materials. 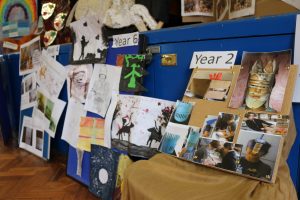 Although this year has been slightly different, the work that was produced in the academy-wide project has been extremely impressive.

The variety of work produced from different year groups is testament to the pupils’ creativity, and is a product of the cross-curricular nature of the project itself.

Kristina explained: “All of the children saw the same picture, but decided to do so many different things with it!

“For example, in Reception, we noticed the oranges in the picture and decided we would focus on that. So, we looked at the different shapes of an orange that we could use to make art. 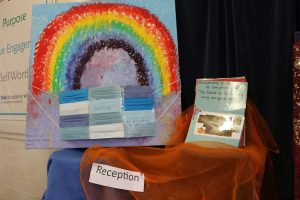 “Using their maths knowledge of semi-circles and circles, we printed to make a larger picture out of oranges!

“Year 6 elected to write poetry instead, based on the soldiers in the picture, connecting the art project with their literacy and creative writing skills” she added.

In addition to these, the project also promotes the children to gain an understanding of the historical context that surrounds the painting. 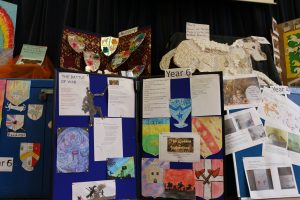 Other examples of work produced for the National Gallery project include creating a horse out of different materials, designing armour/shields and looking at the use of flags in historical battles.

The pupils thoroughly enjoy participating in the Take One Picture project each year, as they relish the opportunity to explore themselves artistically and admiring the different outcomes that different year groups come up with. 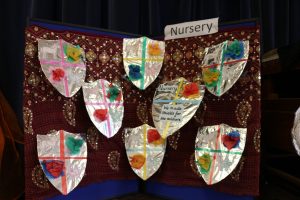