Park Academy student Jack McKenzie & his sister Abbie are on a 50k run for NHS heroes at Hillingdon Hospital & on their way to £1,000

With school closed, his GCSE exams cancelled and a four-month stretch ahead of him before starting at college, teenager Jack McKenzie could have opted to lie back and enjoy summer.

Instead the 16-year-old has launched a fundraising campaign to support the doctors and nurses working at Hillingdon Hospital as the country battles coronavirus.

The Park Academy student is planning on running 50k in May with his ten-year-old sister Abbie. The pair had set a target of £50 which they smashed days ago thanks to local community support and are on their way to amassing £1,000. 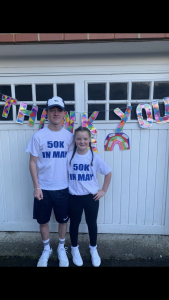 The duo will adhere to the Government’s social distancing guidelines and will complete the challenge over a number of days as the distance, which is approximately 31 miles, will be covered during their hour of daily exercise.

Jack, a Year 11 pupil at the Park View Road school in Hillingdon, expects to complete the challenge within 10 days. A talented footballer and athlete, Jack will carry on running with his little sister to support her so will exceed the 50k challenge.

Explaining why he wants to help the NHS with vital funds at this time, he told the Hillingdon Times: ‘’It’s the hospital where my siblings were born and my best friend’s mum works as a ward sister at Hillingdon Hospital so I know how he’s feeling about his mum going to work at the moment, there is that concern.

‘’Doing a run with my sister is a nice thing to do, we are really close.’’

Abbie, who also enjoys football and plays for the Denham Ladies U-11s team, added: ‘’I wanted to do something to challenge myself and I’m pleased the money will help the doctors and nurses at the hospital.’’ 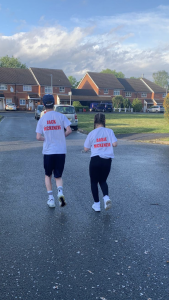 Jack currently plays for Beaconsfield Town’s Under-18s team and it is mum Kerry who encouraged him to start running for an hour every day during lockdown.

Mrs McKenzie is keen he maintains his fitness ahead of the start of his scholarship with Beaconsfield Town FC Academy in September. She is thrilled his decision to keep himself active has turned into a worthy cause and that his sister has joined in too: ‘’The Hillingdon Hospital is our local hospital and those doctors and nurses are saving lives. It’s lovely to see people supporting Jack and Abbie so they can support the NHS.

‘’My children make me proud anyway but they were motivated to help Hillingdon Hospital because they wanted to. They weren’t told to do this fundraising challenge and that’s what’s so great about it.’’

Staff at Park Academy have also donated towards Jack and Abbie’s fundraising efforts.

Park Academy Principal Juan Delgado said: ”It is no surprise to us that Jack has decided to raise money for our dedicated frontline workers in the NHS. Jack is not only a talented individual but an individual who approaches life in a positive way and always acts with integrity.”

Jack Taylor, Assistant Principal, said: ‘’The fact he and Abbie are running 50k in May for Hillingdon Hospital speaks volumes about their dedication to support the local community at its time of need. All of the staff are very proud of Jack and what he has achieved, and are all behind him as he takes on his fundraising challenge!”