Students from a Portland school have been selected to sit on the isle’s first Youth Town Council after an online election.

Fifteen Atlantic Academy pupils were elected after students refused to let the coronavirus lockdown hinder them and turned to technology to allow them to cast their votes from home.

Any student up to the age of 16 was allowed to put themselves forward for election and they received mentoring and support throughout their campaigns.

Marylou Orchard, 15, describes the Youth Town Council as a “good opportunity for young people to have their say. I enjoyed putting my manifesto together. I wrote down all my ideas and what I wanted and people voted.

“I think we should organise a music festival for Portland as it would get more community involvement.

“I also think we should have more beach clean ups. Being part of the election process and being elected has definitely made me more confident and I feel like I want to do more with my life now.” 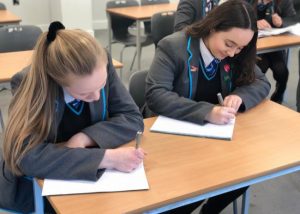 Saskia McGee, 15, from Underhill, Portland, added: “The election process was definitely not a popularity contest.

“I was shocked to be elected as I’ve not lived on Portland for very long. I see this as a vote of confidence and I genuinely can’t wait to get started.”

The idea for a Youth Town Council was planted following Portland Mayor Cllr Sue Cocking’s decision to take part in a Demos Kratos presentation at Atlantic Academy, which involved explaining the part politics plays in the lives of people.

Cllr Cocking told the Dorset Echo: “I’m thrilled with our first set of Portland Youth Town Councillors. The level of interest and engagement from the students has been very impressive. It’s clear that they are passionate about getting involved in community matters and excited about being able to influence change.”

Angus Dawson, Assistant Principal at Atlantic Academy Portland, said: “The lockdown made little difference to the voting process. However, we were not in a position to hold a public announcement of the voting results and so MP Richard Drax did not have further involvement with us. This first wave of young councillors will set an example for others to follow in their footsteps.”