It was tears of joy rather than sorrow for teenagers at Rivers Academy West London yesterday morning.

The Feltham school, which has a pupil premium of 32%, achieved record-breaking A-level results.

This year’s grades reflect a now long established trajectory of improvement at the school for A-level students and this year’s results are the best in the academy’s history.

In line with the most impressive A-level grades to date, a whopping 37.5% of Year 13 students intend to begin studying at Russell Group universities this Autumn.

Vignesh Iyer, 18 and Kyle Nunes who is also 18, secured the grades they needed to take their places at Oxford University.

Aanchal Thapa, 18, also achieved the grades she needed to take up her offer at prestigious Rice University in the US. She is believed to be the first student from the school to attend the prestigious Texas-based university which is dubbed the ‘Harvard of the South’.

Vignesh was predicted 4 A*s in Maths, Chemistry, Biology and Spanish and achieved those grades. He will now study Chemistry at Balliol College.

He said: ‘’I woke up pretty early this morning and kept refreshing the UCAS track and I was really happy that I had got my offer. I had to wait until I got into school to find out what my grades were. There was a fair bit of happy shouting at home this morning!

‘’The last few months and weeks have been an anxious time for me but the teachers at the school were very supportive and always took the time to answer any emails I had or provide words of reassurance and encouragement. I can’t thank them enough for all that they have done.’’

Vignesh from Feltham, west London, believes his excellent mock exam results played an instrumental role in helping him secure his predicted grades: ‘’I got three As and an A* for biology. I worked really hard and I’m glad I didn’t take my mocks lightly this time as Ofqual used them to base grades.’’

After a celebration tomorrow with friends, Vignesh said he would be making a start on the comprehensive reading list he has been sent from Oxford to make sure he is up to speed before his September start.

Kyle Nunes will be the first in his family to go to university and will study Economics & Management at Worcester College, University of Oxford.

He was predicted A*s for Chemistry, Economics, Maths and Spanish.

He achieved A*s for Maths, Economics and Spanish and an A grade for Chemistry. 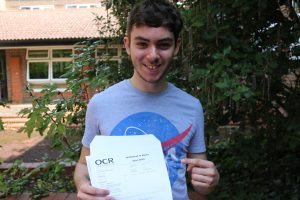 He said: ‘’I’m so relieved. All the noise in the news about the way in which the grading was changing for A-levels made me feel anxious and to get the grades I was hoping for is a massive relief.

‘’I feel like now all my hard work has paid off. It was a shame not to sit the exams, I believe in my ability and I was looking forward to showing what I can do.

‘’I think the teachers have been absolutely amazing. When lockdown happened they were quick to help and provided a lot of comfort and reassurance that they were doing everything they could.’’

Kyle scored four As for his AS-levels and also believes this played a huge factor in him securing the grades he needed to take his place at Oxford. He also credits his electrician father Jose for his work ethic which ensured he took his AS-levels and mocks seriously.

Kyle said: ‘’My parents are very happy and have always and it means a lot to them that it has worked out.’’ 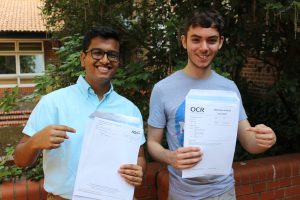 Aanchal flew out to Texas at midday and was at Heathrow Airport when she found out her A-level grades. She is the first to admit she was not in the least stressed compared to her friends as she knew her place at Rice University was secure. American universities place more of an emphasis on the academic achievement of a student over a period of several years rather than a final exam. 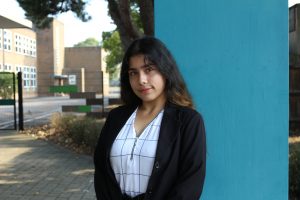 She said: ‘’I scored 9s for my GCSEs including Chemistry and an A for my AS-level Chemistry. I think this si why I got my A* for Chemistry. I felt confident that I would get my place at Rice because they put an emphasis on GCSE results and AS-Level results and I knew I had worked my best.

‘’The sciences are tough when it comes to A-levels but I had brilliant teachers at Rivers and they really put in time during school and after school for us. I decided I wanted to go to Rice after going on the NASA trip organised by the trust [Rivers is part of the Aspirations Academies Trust]. I loved how different it was to a British university.’’ 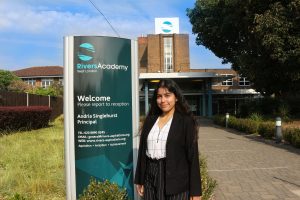 It is believed 27,000 students applied to Rice University this year with only 2,000 places awarded and only 10% of those to overseas students.

Aanchal said: ‘’I’m going to a different country, I’m leaving home, I’m in a completely new place and it feels exciting to challenge and push myself and I’m very excited for that.’’

Principal of Rivers Academy, Andria Singlehurst, said: ‘’We are thrilled with the results which mirror the exceptional drive of our students.

‘’This truly is an awe-inspiring achievement for students and staff at the Academy.  Students have benefited from learning in an Academy with a whole team of staff who are steadfast in ensuring every child reaches their fullest potential, they have learned from teachers who are experts in their field.’’

The pictures that reveal the wonder of Reception Class for our wonderful Atlantic Primary and Bovington Academy students!

The first year of school for reception pupils is a milestone that is always worth celebrating! At...

Read more The pictures that reveal the wonder of Reception Class for our wonderful Atlantic Primary and Bovington Academy students!
28/10/2020

After months in lockdown, a return to school and the chance to enjoy the beauty of the...

It was the sound of the plane’s engine that prompted student Liam Cockwell, a keen photographer, to...