A two-minute silence at the eleventh hour took place earlier this week to remember all those who have lost their lives in wars.

However, this year, like many events in the national calendar, Armistice Day, which officially marks the day WWI ended in 1918, was impacted by coronavirus.

With England in the middle of a four-week national lockdown during this time and restrictions in place, including social distancing and selling and wearing of poppies not always possible, an array of different ways to show support have arisen.

Dorset has a strong military history and at several Aspirations Academies Trust schools in the area, teachers remained undeterred by the challenges of coronavirus. Instead they found creative solutions to mark Remembrance Day. The anniversary is now used to remember all those who have died in wars – not just World War One. This includes World War Two, the Falklands War, the Gulf War and conflicts in Afghanistan and Iraq.

At Bovington Academy, which is located next door to Bovington Camp, many of the students who attend have family who have been or are in the armed forces, the students came in to school dressed in red (for Remembrance) and donations made to the Poppy Appeal. Poppies have also been decorated and displayed in the windows of the school.

At Budmouth Academy the first ever Armistice Day parade at the school took place in the large outside playground. The socially distanced event, organised by Royal Navy Combined Cadet Force officer Chris Dooley, saw all students and cadets that are members of a uniformed youth organisation invited to join. The parade included a field gun set up with flags, a cadet playing the last post and wreath laying.

At Atlantic Academy Primary students who belong to a uniformed youth organisation, such as Scouts or Guides, was given the option of wearing their uniform today to mark Remembrance Day.

Here below the teachers and principals explain the significance of Remembrance Day for their students.

Principal Sara White told the Dorset Echo: ‘’Many of our children have family who have been or are in the armed forces; the school is at the heart of its community so the link between the military and the school is of extreme importance to all of us at Bovington Academy.

‘’As a school team we felt that we still needed to do something special to remember the significance of Remembrance Day in a Covid secure way, so we all decided to wear red and donate money to the Poppy Appeal. The 2-minute silence was also honoured so that everyone had the opportunity for self-reflection. The act of silence allows us to remember and honour those who have made sacrifices for their country.

‘’Although this year people couldn’t come together as in previous years, coronavirus should not stop the spirit of remembrance. To me it means paying tribute to those who lost their lives fighting for their countries so that we can live the lives we lead today. The act of remembrance is a very personal thing and there are many ways to remember those who we are thankful for and those we have lost. With the national pandemic that we are all currently facing, it is also a reminder of the nurses, doctors and other hospital staff that are fighting on the front line against the virus in hospitals across the country.’’ 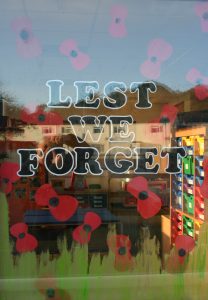 Poppies on display in the school windows at Bovington Academy 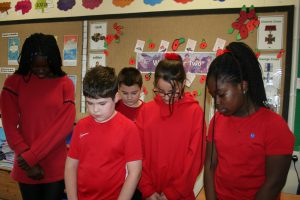 Royal Navy Combined Cadet Force officer, Chris Dooley said: ‘’This year’s parade is as important as any Armistice Day parade but this year more so because there have been so many difficulties: getting hold of poppies, the lack of parades and the veterans unable to take part in the Cenotaph parade. It’s important to show that despite the restrictions of 2020 that the veterans are not forgotten and that we recognise their efforts.

‘’A lot of the students have military families and the parade is a good chance to recognise those that have come before them in the area who went to war to fight for the country.’’

Sam Temple, a Geography teacher at Budmouth who is also a CCF Contingent Commander, read a speech during the Armistice Parade, the first to be organised at the school, in which she said: ‘’We must make sure we remember those who have come before us, to remember their sacrifice so we can live our lives, as we do today. When you leave here, don’t leave it until next year to think about the sacrifice those people made for you. Think about the things you do each day, are we building a world that they would be proud of?’’

Principal David Herbert: ‘’Due to other parades being cancelled this year, Sam suggested we hold the first Armistice Day parade here and it’s great to have been able to do that. It’s important to remember the sacrifices made by those who went to war to fight for this country.’’ 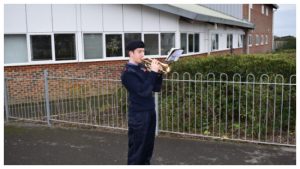 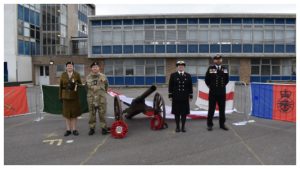 Melissa Heppell, Principal at Atlantic Academy Primary, said all students at the all-through gathered in socially distanced bubbles across the school’s three playgrounds to pay their respects.

Mrs Heppell said: ‘’Any student who belongs to a uniformed youth organisation was allowed to wear their uniform today. We had an eclectic mix from Scouts, Guides, Beavers to St John’s Ambulance.

‘’The children went out to our three different playgrounds in socially distanced bubbles to pay their respects. A Year 6 assembly to mark Remembrance Day was also shared with the school.

‘’A virtual enrichment club last night produced poppies which we have used to decorate the school.

‘’Any opportunity to bring the community together at a time when we are socially distancing is really important. This shows that we still care and we have an understanding for those who have given up their lives.’’ 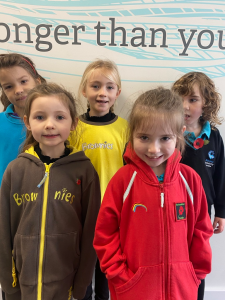 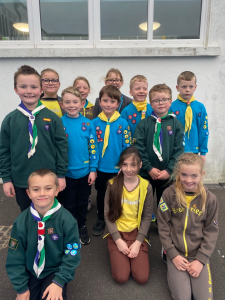