The battle for BTECs: SSWL student tells Evening Standard why he owes his success to a BTEC & why they should not be scrapped

This article, by Julie Henry, was originally published by the Evening Standard.

When Demar Bellamy-Foster started his media BTEC at Barking & Dagenham College, he never imagined that he would spend his summer working on a Hollywood blockbuster.

The internship on Warner Bros’ Fantastic Beasts: The Secrets of Dumbledore, organised by the college’s East London Institute of Technology, was the highlight of the course.

“We had some brilliant work experience as part of our BTEC, including working with crews on Amazon, Apple and Netflix productions,” said Bellamy-Foster, who hopes to work in the film and TV industry. “We had a fantastic time at Warner Bros and were put up in a hotel for six weeks on a salary. Pretty good going for a summer job! We were super proud to be a part of an experience like that.”

Bellamy-Foster is one of thousands of students who have completed BTEC Nationals, a range of practical, skills-based courses, from applied science, art and design and business to construction, engineering and health and social care.

The qualification is respected by employers and accepted by about 95 per cent of universities. About one in four undergraduates studying in England has BTECs or a combination of BTECs and A-levels.

Despite its brand success, a range of popular BTECs is set to be axed in the Government’s agenda to overhaul skills education in England. In a nutshell, ministers wants to divert more students – particularly those with lower academic attainment – away from expensive, three-year degrees with dubious career prospects, towards shorter technical, work-related courses and apprenticeships.

Towards this end, it has introduced a new suite of qualifications, called T-levels – the “T” is for technical. Designed with input from industry, each T-level is worth three A-levels and is closely aligned with a specific occupation or job sector.

To ensure uptake of the first 10 T-levels, at least 106 vocational and technical qualifications deemed to overlap with T-levels and A-levels will be defunded from 2024.

The casualties include BTECs in computer science, computing for the creative industries, computer engineering, and construction and the built environment. Other well-established courses such as City & Guilds Level 3 diplomas in plumbing, bricklaying and plastering are also on the list. More qualifications will be under threat over the next few years as other T Levels are rolled out.

Schools and colleges are up in arms about the decision to axe BTECs and other qualifications. In the Department for Education’s own consultation on T-levels, 86 per cent of respondents disagreed with the proposal to remove funding for qualifications that are judged to overlap.

Teachers’ unions, the Independent Schools Council, Universities UK, the heads of university medical schools, the Crafts Council and Creative UK are spearheading a campaign against it. Their protests have had some recent success; a number of engineering BTECs have been removed from the most recent defunding list, published a few weeks ago.

Vocational qualifications in health and science have also been temporarily removed from the list because of concerns about the first assessments this summer of the T-levels that were supposed to replace them – not a good start for a new qualification.

“Without the availability of BTECs, many disadvantaged students might not have attended university at all”

Many of those who object to defunding have no problem with T-levels being introduced, just not at the expense of BTECs and other established qualifications.

They point to the narrow career focus of T-levels, which pupils will choose at the age of 15 or 16, when many have no idea what they want to do. The problem is compounded by the fact that, unlike BTECs, T-levels cannot be studied alongside A-levels.

Tina Gotschi, principal at Ada, the National College for Digital Skills, in north London, thinks the A-level or T-level split is too binary for teenagers who can change their mind multiple times about their future plans.

“We have been incredibly successful with the computing BTEC,” she said. “If it ain’t broke, don’t fix it. Why are we throwing out something that colleges like, students like, employers like and universities like?”

She said she would struggle to recommend T-levels to students knowing that many at 16 do not know what they want to do: “I can’t, in good conscience, say, ‘Let’s take the keys to your future doors away now.’”

Dr Gill Wyness, from University College London’s Institute of Education, one of the authors of a recent Nuffield Foundation report on BTECs, makes the point forcefully about the young people who will lose out most.

“It should be remembered that without the availability of BTECs, many disadvantaged students might not have gone on to attend university at all,” he says.

At Chestnut Grove Academy in Balham, where about one third of the sixth form is studying BTECs, head teacher Christian Kingsley has similar concerns.

“The blended BTEC and A-level approach works really well. My reservation about T-levels is not a criticism of the qualifications per se, it is that by doing them, children are putting all their eggs in one basket,” said Kingsley.

“I always bring it back to my own kids; I have three boys who are much younger but at the age of 16, would I advise them to study something exclusively in one area? I don’t think so. I think I’d be saying, ‘Keep your options open. You are only 16, you’re a child.’”

Kingsley points to the longevity of BTECs – they were first awarded in 1984 – and at the various failed attempts over the decades to overhaul vocational qualifications. Does anyone remember the employer-designed diplomas, worth five GCSEs, introduced in 2005/06 by the Blair government, for instance?

Kingsley’s key concern is not with the arrival of T-levels (indeed the school is considering whether to offer the science T-level) but with the uncertainty that now surrounds BTECs as a result.

“I think there will be a whole load of students who don’t know where to go,” he said. “At the moment we have students doing health and social care BTEC, for instance, who go on to do nursing or midwifery. These children – they’re not all disadvantaged but some of them are – study a qualification which helps them into a job for life in sectors that are crying out for employees.” 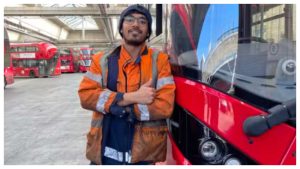 Aaron Ubasa thinks that his engineering BTEC was instrumental in securing his bus and coach Level 3 engineering technician apprenticeship with London United buses, where he now works.

The 22-year-old switched from A-levels to BTECs in engineering and science while at Space Studio West London, a STEM (science, technology, engineering and maths) focused school in Feltham.

“There were less exams and longer deadlines and that really suited me,” said Aaron. “On the practical side, we went to Kingston University once a week to work on projects. I also worked on a six-month project with engineering company Hitachi Rail, which was arranged by the school and was great. I really feel my BTECs prepared me for the world of work.”