The early morning start did little to dampen the excitement of the Year 12 students that gathered at London’s Heathrow Airport for the start of their journey to visit the NASA’s prestigious space centres.

The day began with a welcome briefing by Mike Grocott and Richard Healey from Space Education Adventures, who have had over 15 years of experience in organising the trip to some of the most important sites in the history and future of space exploration.

The first leg of the trip involved a 10-hour flight from London to Houston, Texas.

Jet lag can be an issue for those ordinarily making the trip across the Atlantic Ocean, however that wasn’t the case for our students, as their thrilling itinerary for the next ten days left little room for tired eyes. 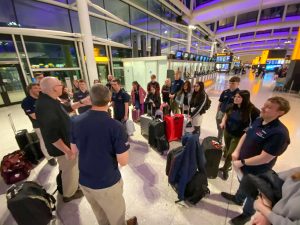 On the aeroplane, students were tasked with thinking of questions and conversations to hold with the NASA professionals over the course of the trip, including astronauts, engineers and scientists from different parts of the organisation; which caused plenty of interesting inflight conversations.

Students from six Aspirations Academies Trust academies have earned a place on the trip. It is a huge opportunity to learn first-hand the pioneering work of NASA space exploration and how experts are planning future missions at what is widely considered to be the most esteemed aeronautical organisation in the world. 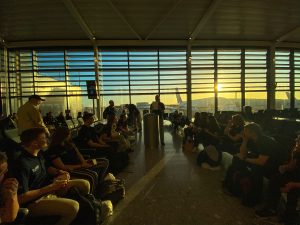 Louise Punchard, 17, from Magna Academy Poole, said: “I am really excited for what is to come over the next few days in Texas. Even though all that we’ve done is travel, it is so exciting just to be here in the United States. Today has just fuelled the excitement for the rest of the trip as it has become real now!”

Martha Brown, also 17, from Budmouth Academy, agreed with Louise, adding: “Although the journey was long and tiring, it’s made us all really excited for the rest of the trip!”