The Science Club for Girls at Harriers Academy is shortlisted for a top award – well done Maxine Roberts & her girls!

A Banbury school’s science club for girls has been shortlisted for a top accolade.

Set up by Harriers Academy teacher Maxine Roberts, the aptly named Science Club for Girls is now in the running for an Oxfordshire Youth Award.

The after-school club was launched two years ago to encourage girls to develop greater confidence about science and Mrs Roberts told the Banbury Guardian it is having the desired effect:

‘’It’s really important that girls are involved in science. We have 20 girls who are members of the club and they are actively engaging with science after school and want to learn more. ‘’The girls love being able to make the decisions about what they do each week. Science is all around us, is a part of everyday life and this club allows them to see that.

‘’To be shortlisted makes me very proud of the girls and the club.’’ 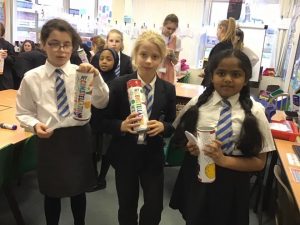 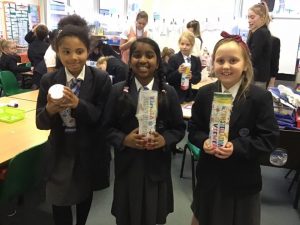 The club has been nominated in the STEM (Science Technology Engineering and Maths) innovator category and Mrs Roberts will discover if she and the girls have won during a virtual ceremony on October 28th.

There are 20 places available each term for girls aged between eight and 11.

Experiments or tasks carried out by the science club girls have included optical illusions using Christmas decorations and making sloppy slime in cling film prompted a discussion about chemical reactions.

There have also been sessions about atoms, the planets, space and the girls have even made their own lava lamps. The girls pictured in this article made star constellation viewers, 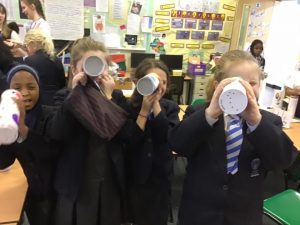 The girls have also benefitted from support and mentoring from older girls based at Futures Institute who, prior to lockdown, would go along to sessions.

The Banbury secondary is also part of the Aspirations Academies Trust and is a science-focused school.

Mrs Roberts explained: ‘’The girls from Futures Institute act are their role models and they really benefit from the conversations they have with them.

‘’Girls are often afraid to make a mess but the science club gives them a chance to do just that: to have a go and make a mess and they love it!’’

Harriers Academy has previously been awarded a prestigious Primary Science Quality Mark (PSQM) for the hard work undertaken by Mrs Roberts and other teachers to raise the bar when it comes to science on offer at the school. It is also recognition of the diverse and rich science capital now available to pupils.