The science club for GIRLS: From making lava lamps to learning about atoms, meet the little women bossing the subject at Harriers Academy!

They’ve learnt about the colours of the rainbow using Skittles in a bowl of water, made their own slime, and above all learnt that science can be exciting for girls!

The teacher responsible for bringing the fun factor and setting up of the Science Club for Girls at Harriers Academy, Banbury is Maxine Roberts who collaborated with science teacher Simon Sterland.

Mrs Roberts took over as Science Lead three years ago at the Aspirations Academies Trust school and realised there was a need to increase the confidence of girls when tackling the subject.

She spoke to Mr Sterland who is based at Wykham Park, Banbury which is also part of Aspirations AT and the idea for a club devoted to girls was born.

It was decided that the teenage girls studying at the Banbury Campus Sixth Form would come in to help their young mentees and inspire them.

The collaboration also allows Harriers to use resources that may not be available at the primary school.

Mrs Roberts said: ‘’The science club is free and the girls love it! If you ask them what they like they will say it’s great that there are no boys! The girls also love being able to make the decisions about what to do each week.

‘’Science is all around us, is a part of everyday life and this club allows them to see that.’’ 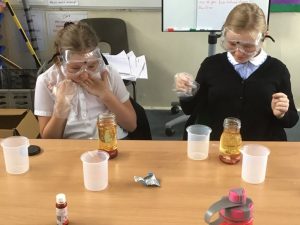 Mr Sterland said: ‘’We are seeing a decline in female mathematicians, engineers in this country as a whole. Maxine and I took the view that the sooner you get girls involved in science the better. It’s a subject that is still seen as being for boys and that should not be the case.

‘’The sixth formers from Banbury Campus who come in to help are studying science subjects and it’s aspirational for the younger girls to see them.’’

There are 20 places available at the club each term for girls aged between eight and 11.

There have also been sessions about atoms, the planets, space and the girls have even made their own lava lamps.

The latter allowed them to learn about the density of oil and water and watch the chemical reaction that took place during the making process. 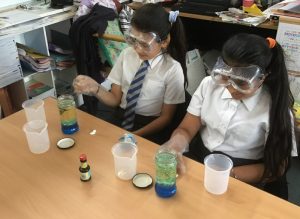 Recalling the positive comments from many of the girls, Mrs Roberts said: ‘’They tell me they have fantastic fun, they learn new things and even if an experiment doesn’t work it doesn’t matter because science is experimental.’’

The accolade is testament to her efforts to raise the bar when it comes to science on offer at the school and recognition of the diverse and rich science capital now available to pupils.