When Harry met Omar: Space Studio WL student writes a special song for his deaf peer to let him know he is represented

Strictly star Rose Ayling-Ellis won the nation’s hearts and the show’s glitter ball with her stunning performances and changed stereotypes about deaf people and music with each step.

A student hoping to achieve the same result – but amongst his peers at school – is Omar Elsaaidi who attends Space Studio West London.

The 17-year-old created and released a rap tune, titled Hear Me, which he wrote especially for fellow student, 16-year-old Harry Lee who is deaf and wears a hearing aid.

Omar, who is passionate about music and its power to be a force for good, said he wrote the song to make Harry feel special and represented.

He said: ‘’When producing the lyrics, I put myself in Harry’s place and thought, if I could speak on Harry’s behalf, what would he say?

‘’I produced an uplifting rap for Harry with my manager and mentor doing the chorus. The song has lyrics from Harry’s point of view and then lyrics from my perspective.

‘’In creating lyrics for Harry I had to step out of my comfort zone and think about Harry’s perspective. I’m delighted that Harry likes the track.’’ 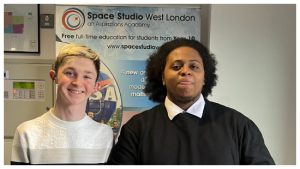 Space Studio West London is a STEM-focused school for 14 to 18-year-olds and currently has places available in Years 10 & 12, September 2022 start.

Omar travels from his home in South London to attend the school. He joined so that he could pursue his love for physics and is complimentary about the resources available. 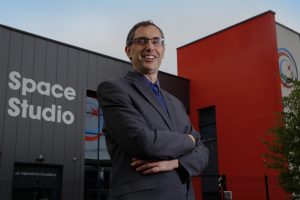 Harry said he was grateful and delighted Omar had penned a song for him. Harry said: ‘’As a deaf student, every day is challenging with the need to work twice as hard just to keep up. Omar’s song is telling my story and saying I’m good enough. I thank him for putting himself in my position.
‘’I met Rose at my theatre group, Deafinitly Youth Theatre, which Rose [Ayling] attended years ago. Rose has done more for the deaf community in 10 seconds of silence [during her Strictly performance] than 50 years of campaigning has. People like Rose and Omar are leading the deaf community towards equality.’’