A Weymouth teacher with family in Ukraine has expressed her gratitude after hundreds of shoe boxes were filled with urgent supplies to help those in need who have fled the war-torn country.

Almost 500 boxes filled with gloves, hats, socks, colouring books, teddies, toys, stationery and sanitary products have now been dispatched to a drop off point in Blandford Forum where they will then be sent to the Polish city of Przemysl.

More than 1 million people are believed to have crossed from Ukraine into Poland since the Russian invasion began last month.

Poland, which shares a 310-mile border with Ukraine, has taken the majority of the 1.7million people who have left their homes since the war began. 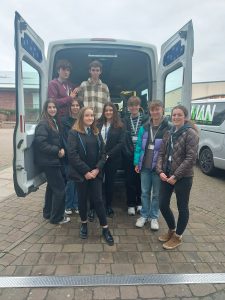 Aid efforts have largely been run by volunteers, NGOs (Non-Governmental Organisations) and municipalities.

Students from all year groups at the school from Year 7 through to members of the Sixth Form Student Union donated items and also helped to pack the shoe boxes. 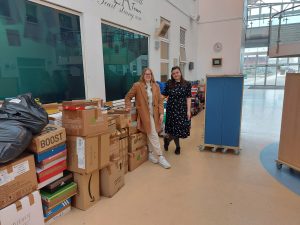 Miss Coughtrey told the Dorset Echo: ‘’It was amazing to see so many people willing to get involved and do their bit to make a difference for the people of Ukraine.

”It has been heartwarming to see what happens when a community comes together with empathy and compassion for others – every member of the school community was keen to get involved in some way.
‘’I would also like to give a special thank you to Ian Ferguson, who manages several Weymouth taxi firms, for transporting the donations for us.’’ 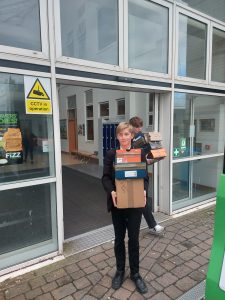 Jack Pearson, a Year 8 pupil at Budmouth Academy, helps to carry donations to the van