Girls’ football team from Wykham Park Academy crowned County Champions – despite half never having played in a team a year ago!

A girls’ football team from Wykham Park Academy in Banbury has been crowned County Champions – despite around half the girls never having played in a team a year ago!

The students beat off all the competition during a tournament at The Oxfordshire Academy on May 24.

The team’s road to victory was paved by PE teacher Lizzie Keys who joined the school in September 2020. A former midfielder who has played for Newcastle Ladies and Premier League team Derry city, Ms Keys was keen to share her passion for the game with female students in Years 7 and 8 at the mixed secondary school.

A team was initially formed during lockdown to play games for fun and to build skills of teamwork and leadership.

At the start of this academic year the girls expressed an interest in playing in matches and quickly became winners locally in North Oxfordshire. This led to a tournament featuring the 10 best schools teams in the county.

After a number of pool matches and a semi-final, Wykham Park Academy’s team found themselves in the final, facing hosts The Oxford Academy. A 2-1 win for the Banbury students saw them crowned County Champions for 2022. 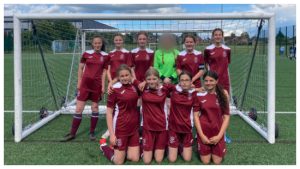 Ms Keys, who is also a trained sports coach, told Banbury FM: “I couldn’t be more proud of the team. They worked incredibly hard and they deserve to be crowned champions.

“They put in lots of practice sessions, after school and on Friday nights, and around half had never played football before when they decided to join the team. They decided to give it a go after hearing about it from their friends.

“They all worked phenomenally well as a team and it was wonderful to see it all coming together and then to see them triumph at the final.”

Sophie Gold and Chloe Hall, who are both 13 and members of the team, are thrilled with their achievement. Sophie said: “I’ve been playing football since I was 5 and I’ve always liked kicking a ball around. It was fantastic to win.”

Chloe added: “I come from a sports-orientated family and I’ve grown up watching football but never played in a team. I joined because some of my friends said how great it was. It was amazing as we didn’t expect it.”

Sylvia Thomas, Principal at Wykham Park Academy, said: “Yet again our girls have excelled themselves; Miss Keys has done wonders in coaching and developing a superb team who play with and for each other. Well done girls we are all very proud of you.”