From Boris Johnson to Keir Starmer & insight into life, Sir Vince Cable did not hold back when questioned by Rivers Academy students

This article was originally published in the Hounslow Herald.

Renowned for his dogged determination and his frank opinions during his time in Parliament, it appears retirement has failed to dampen his candour.

Rt Hon Sir Vince Cable spent the afternoon with Sixth Formers and Year 11 students at Rivers Academy West London where the former Liberal Democrats leader voiced his thoughts on a number of subjects from his career trajectory to his views on why the prime minister ‘does have to go’ following the Partygate scandal and why a ‘good and competent’ but ‘not very exciting’ Keir Starmer would make a great job of leading the country.

During the Q&A session, one pupil asked: “How do you feel about Boris Johnson’s situation at the moment? [the Partygate scandal]’’.

Cable replied: “You can’t have a prime minister who sets laws and then wrecks them, you just can’t. And I think most Conservative MPs accept that privately but they don’t know how to get rid of him and they don’t know who would replace him and they’re worried they may get somebody worse because their top contenders are not great. Liz Truss is flaky, Rishi Sunak was good but he has completely destroyed his reputation with all the tax dodging stuff. The one who would probably do a good job is Jeremy Hunt but they don’t totally trust him because he was pro-Remain.

“So they don’t know who to replace him with [Boris] if they get rid of him. We have got to a point where British politics has become very degraded and standards have fallen very badly. It centres now around honesty and trust and I think for that reason he does have to go but I think the Tories can’t get rid of him until we get to an election.’’ 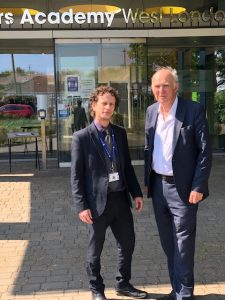 Will Berryman, Head of Careers at Rivers Academy, organised the visit with Sir Vince Cable

The ‘Partygate’ scandal comprises of a series of allegations that a number of parties took place across 10 Downing Street and other government buildings during the Covid-19 pandemic, which may have violated legal restrictions on gatherings in place at the time.

Cable retired from politics in 2019 and now fills his time writing books – his latest about how to be a politician will be released in the autumn – and enjoying his hobbies, namely ballroom dancing. Cable also hosts talks for students to inspire a passion for politics and these sessions are run through the Speakers for Schools initiative founded by ITV Political Editor Robert Peston.

Asked by another student what he thought of the Labour leader Keir Starmer, Cable used his answer to make a ‘strong case for politicians who are a bit dull but are good’ citing Starmer and former PM Theresa May as perfect examples.

He said: “Well, I’ve got quite a lot of respect for him [Keir]. He’s a very competent guy. I worked with him quite closely on the Brexit issues and he was always very calm and sensible. He’ll probably be a good prime minister, in fact I think the most likely outcome at the next election is that Labour get more seats than the Tories but they don’t get enough to form a Govt and they therefore rely on support from the Lib Dems. But he probably will be the next prime minister, I think.

“His problem as you know is that he’s not very exciting. He’s not particularly eloquent or funny in the way Johnson is. He’s not a great speechmaker. He comes across as a bit dull. But there’s nothing wrong with being dull.

“Sometimes you just need people who are honest, competent, hardworking and get on with the job. One of the best people [in politics] was Theresa May who everybody thought was dull and boring but she was very honest. Very, very honest and very hardworking and a very decent woman. I would make a strong case for politicians who are a bit dull but are good.’’ 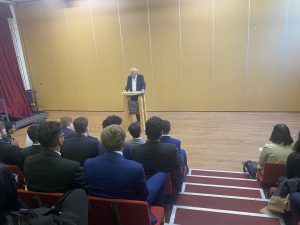 Cable also shared his advice on how to succeed in life stressing the importance of teamwork, persistence and solid personal relationships. He said: “I stood for Parliament for 30 years before I got in at the fifth attempt. There was a vacancy in Twickenham, which was then a Tory seat, and I stood once and didn’t get in but didn’t give up and eventually won the seat and stayed there for 20 years.

“There are various lessons you learn from that and one is that being persistent and not giving up – very easy to give up but I stuck at it and eventually got elected against everybody’s expectations.

“And the other thing I learnt at school because I was very keen on team sport is that teams matter. Being part of a team, learning how to organise a team is absolutely critical in politics.

“The other thing, which sounds a bit personal but is very important, is having good relationships. I’ve got two rings – my late wife and present wife and in both cases two very happy marriages.

“The thing with politics is you take a tremendous amount of punishment, it’s very aggressive and you do need somebody to stay with you and give you support.”

Will Berryman, Head of Careers at Rivers, organised the visit. He said: “Vince Cable gave a fantastic talk to our students. It was thought-provoking and inspiring.” 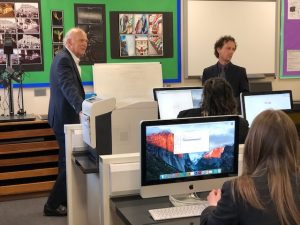