It was a day filled with memories – 90 years of them!

Students and staff recently enjoyed a day of celebrations to mark the 90th anniversary of Oak Hill Academy in Feltham.

The popular junior school has always remained on the same site at Ashford Road but started life as Feltham Hill Junior School. It switched to its current name in 2014.

Each year group had also spent time studying a decade working up chronologically from 1930s to 2000s in their history lessons this half term. 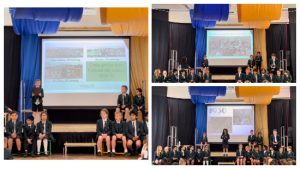 Honesty Darkes, Senior Assistant Principal at Oak Hill, told The Hounslow Herald: “Our 90th anniversary celebration was lots of fun for the students. There are lots of special memories associated with the school: VE day was celebrated on our school field and we’ve had amazing drama productions at the school through the years, our popular annual fireworks nights, the opening of a new building on our site and changing to Oak Hill Academy in 2014.

“It’s important to celebrate the school’s history and changes it, and society, have been through.

“It’s also important to celebrate the pupils and staff who have been lucky enough to attend or work at Oak Hill over the years.’’