Pupils at a local primary school walked to Feltham Memorial to commemorate
Remembrance Day and pay their respects to fallen heroes past and present.

The group of students from Oak Hill Academy in Feltham, who ranged in age from 9 to 11, made the journey of under a mile to lay a poppy wreath, recite a poem and listen to prayers.

The trip was all the more special because it was cancelled last year due to the Covid-19 restrictions that were in place.

Yvonne Rice, Year 5 teacher and History Lead at Oak Hill, told the Hounslow Herald: ‘‘It’s important that the children understand the importance of Remembrance Day and realise that there are people who lived in the local area who lost their lives in World War I and World War II.

‘‘Prior to the walk the students participated in a reading lesson about Armistice Day and this included reading the poem We Shall Keep The Faith by Moina Michael.’’ 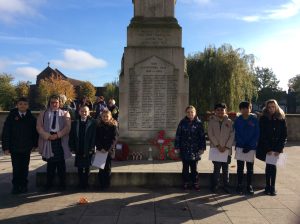 Reverend Anne Dollery, Vicar of St Dunstan’s Church in Feltham, was at the memorial too to recite a prayer alongside a local soldier who also said a few words.

Members of the public and those from a local history group were also in attendance.

Mrs Rice said: ‘’I’m very proud of the children and how well they did. They were really thoughtful and respectful when we were there and listened to the prayer that was being read, they put the poppy wreath down and gave a little bow and gave a step back. Some members of the public also thanked the children for their reading.’’

The tradition of walking to Feltham Memorial was in place for five years before it was cancelled last year due to lockdown and Covid-19 restrictions.

Staff and students paid their respects to the fallen before a replica Feltham War Memorial which took pride of place in the school hall.

A whole-school assembly was also delivered virtually and saw students taught about the history behind Remembrance Day. Students read poems to commemorate the day and a poppy wreath was laid on the Feltham War Memorial replica.

The two-minute silence occurs at the eleventh hour on the eleventh day of the eleventh month to mark the end of the First World War and the 9.7 million soldiers who lost their lives in the war. The anniversary is now used to remember all those who have died in wars – not just World War One. This includes World War Two, the Falklands War, the Gulf War and conflicts in Afghanistan and Iraq. 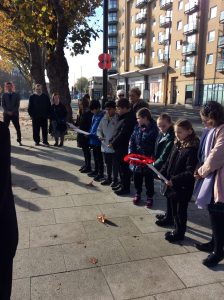