For the last five years, students and staff at Oak Hill Academy have maintained a tradition of walking to Feltham War Memorial to commemorate Remembrance Day.

This year with lockdown enforced and Covid-19 restrictions in place the usual commemoration plans were halted prompting Rachael Saim, Principal of Oak Hill, to devise a creative alternative.

Staff and students paid their respects to the fallen before a replica of Feltham War Memorial which took pride of place in the school hall.

A whole-school assembly was also delivered virtually and saw students taught about the history behind Remembrance Day. Students read poems to commemorate the day and a poppy wreath was laid on the Feltham War Memorial replica. 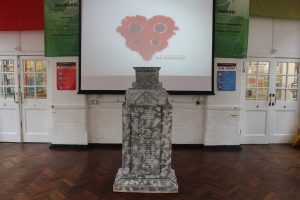 Rachael explains: “In the assembly, I taught the students about how the two-minute silence was first introduced in 1919.

“This year is the 101st year that people in Britain have commemorated, which in itself is a fascinating historical fact.”

The two-minute silence occurs at the eleventh hour on the eleventh day of the eleventh month to mark the end of the first World War and the 9.7 million soldiers who lost their lives in the war.

“Learning about Remembrance Day not only forms part of our history lessons at Oak Hill but also highlights the importance for the British value of Respect, which we can role model and teach to the children through this particular experience.”

The replica of Feltham War Memorial was created by staff at Oak Hill and involved many days of hard work. Rachael explains: “I’m 5ft 4 and it’s taller than me!” 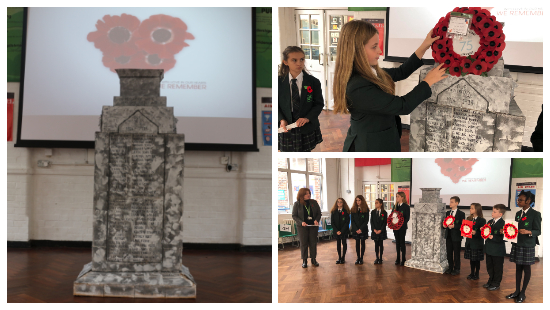 “Creating this replica means that the children will notice the real Feltham War Memorial more when they walk home from school.

“It will encourage them to think about Remembrance Day and recognise why it is so important to pay our respects.”

Year 6 student Jagoda Godlewska says: “It’s important for us to pay our respects today because we’re remembering all of those people who risked their lives to save our future country.

“It’s really kind of them to do that so it’s really important for us to show our appreciation.”

Although things were done differently this year, Rachael is thrilled that staff and students were still able to commemorate this historic day in some way:

“It is such a great shame that we cannot walk to the memorial this year due to Covid-19 restrictions.

“However, we don’t give up easily at Oak Hill and decided to recreate the event in the school hall.”

The annual walk to Feltham War Memorial typically involves students, parents and staff coming together as a community to pay their respects. Rachael describes this years alternative as a “fun and creative way to keep the tradition alive”.

The students were particularly keen to bring this tradition to the school hall this year. Maja Pankowska, Year 6, explained: “Creating our own memorial here means that we were still able to show our respect to everyone that died for our country.

“It was still important for us to do this even though we couldn’t go to the real Feltham War Memorial this year.”

Parents are able to make donations to The Royal British Legion through Oak Hill’s payment website.