Despite two years of disruption caused by COVID-19, students were back to receiving grades based on exams that were marked externally and this meant that many had faced a nervous wait over the summer period. They were not disappointed.

Mike Hoffmann, Principal told the Dorset Echo: “These students have had to be incredibly resilient over the last few years. They have faced a combination of home learning, remote lessons and thankfully normal schooling in Year 11, so they deserve the success we see today.” He added: “I have nothing but admiration for how hard the students and staff have worked over the last few years.”

There were many students with stand-out results, both in terms of the high grades achieved and also in terms of the progress they have made. Kerenza Cambell, Laura Matthews, Maia Barker, Abigail Pearson and Millie Brodie are all good examples but there were many others.
These students achieved grades 8 or 9 (higher or equivalent to the old A* award) in almost every subject and they will be joining A-level courses in the Budmouth 6th Form with the best grades possible. 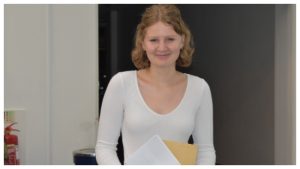 Laura Matthews was one of Budmouth Academy’s top performing students 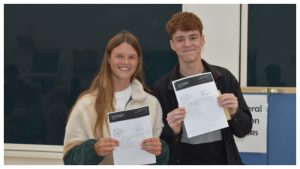 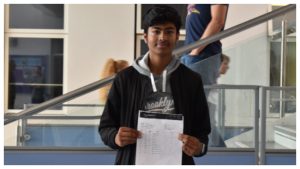 Budmouth Academy’s Abrar Sabid was proud of his GCSE results

Outstanding results were also achieved by many other students, including Ben Saunders, Logan Brown and Aidan Brooks, all achieving top grades including grade 9s, that will see them embark on some very challenging A’ Levels in subjects like Maths, Further Maths, Physics and Geology.

Pete Hudson, Vice Principal was particularly impressed by the progress made by many of the students: “Students and staff have worked tirelessly in lessons, after school and over the holidays to try and catch up on work missed over the last few years and to prepare them for the exams. To see so many happy faces is what makes this job so worthwhile,” he said. 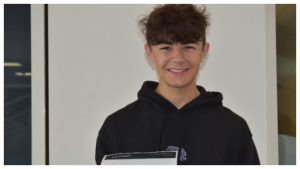 Budmouth Academy’s Finnley Evans was praised for his resilience & determination

As well as outstanding attainment, many students also made fantastic progress over their last five years at Budmouth. Many of them, like Joel White, James Walker and Rebekah Rusu achieved grades 8s and 9s in many subjects, exceeding their targets by up to three or four grades in some cases.

“At Budmouth Academy we are particularly keen to stress that skills like resilience, perseverance and purposefulness are the keys to this success,” said Mr Hoffmann. These skills were epitomised today by students like Yasmine Taylor, Imogen Edwards, Aimee-Grace Leadley, Alice Goater and Finnley Evans.

These students made the most progress overall and will all go on to study Level 3 courses at Budmouth Academy in September.