A giant stone carving will be transported from Bridport to Portland in preparation for a proposed eco project.

A nine-metre Wood’s cycad tree made completely from Portland stone has had inscriptions carved into it by more than 2,700 children across Dorset.

Working with the Eden Portland Team on a project called Sign the Tree, school children have sent a message in stone to the recent 2021 United Nations Climate Change Conference in Glasgow.

The carving was created by Sebastian Brooke, stonemason and founder of the MEMO Project, which collaborates with the Eden Project on Eden Portland – a proposed development that would be based at a former quarry and mine within the tunnels of Albion Stone’s Jordans Mine. 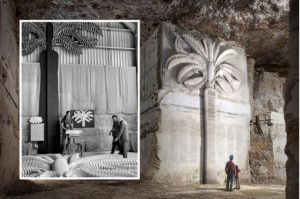 Mr Brooke told the Dorset Echo: “The stone carving has been in Bridport for nine months at a sculpture yard and we hope it will be transported to Atlantic Academy on Portland in January next year.”

One school that took part in the project was Radipole Primary School, in Weymouth.

Ben Barker, head teacher at Radipole Primary, said: “It’s wonderful that our children will make their marks on something so exciting and so much bigger than themselves – it will help them know that they are a part of this whole wild, biodiverse world.”

Debra Roberts from St. George’s Primary, said: “It’s so exciting that each child of the island has had the chance to leave their mark on this totem for biodiversity.”

The proposed Eden Portland would bring together the visions of two world-class attraction projects that had been planned for Portland for some time – MEMO and Jurassica.