When 12-year-old Marli McNab, a mixed-race Budmouth Academy student, was asked to write about something she could change in the world, she chose racism as her topic.

Marli produced a powerful, moving and thought-provoking presentation for her Year 7 Pixl Edge project about the racism she has encountered growing up in Weymouth. An excerpt of Marli’s first-hand experiences of the prejudice she has been subjected to can be read below. Clips of her work can also be seen here and the project in its entirety is included in the PDF link at the end.

Her mum, who is the first to praise Budmouth Academy for all the support Marli has been shown, was so proud of her daughter’s efforts she shared her work on Facebook. Marli subsequently found herself the subject of a special BBC South Today report which you can also watch here.  Well done, Marli!

”My name is Marli McNab. I was born in Dorchester and have a Belizean dad and British mum. I am half Black Caribbean and half British, this makes me mixed race!

In my lifetime I have experienced lots of racism, I’m only 12 years old and in my first year at secondary school. I wanted to spread awareness of Black Lives Matter and show how much it means to me.

People often touch my hair without asking which is really annoying and uncomfortable. This just makes me feel that I am different to other people because of the way I look.
Even though some of these things don’t sound bad, they do hurt badly. They make me feel worthless and not welcome because other people don’t approve of the way I am as a person.

Sometimes I even feel as if I need to change the way I look and do certain
things because people hate on the way I already do things. Hearing about all the racism that’s happening around the world makes me feel nervous because of what people think about me. I feel scared that something bad, like what we see in the news, will happen
to me. I am terrified that people will tell me that I don’t belong because of the way I look.

Being me is hard and i’m sure many other people can understand how I feel, and the people that don’t should feel lucky that they are not made to feel this way.
I feel that ‘white privilege’ does exist in the society I live in. My white friends do not have to put up with the experiences I have had to deal with. I stand out from the crowd and am judged by everyone all the time including by adults as well as children. People assume
that I am fierce and a bully. I am constantly judged every single day and have to work and try harder than my white friends just to be accepted and prove my worth.

One thing I tell myself everyday is ‘Marli keep your head up, you are strong, powerful, talented and beautiful in your own ways and if anyone hates on that then that’s their problem not yours because you’re amazing!”’ 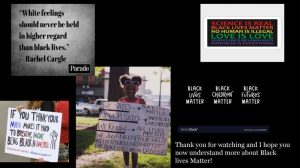 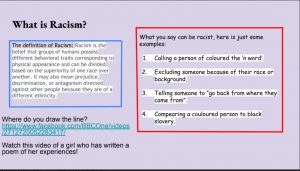 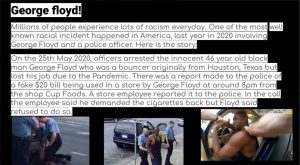