Nikki Bagshaw, a school health nurse at Wykham Park Academy in Banbury, has spoken out about her excitement for the school-aged immunisation programme.

The Oxford Health immunisation team are currently running their secondary school immunisation programme: human papilloma virus (HPV), tetanus/polio/diphtheria booster and meningitis, and the school health nurses are integral to the smooth running of the session in their school.

It’s is Nikki’s third year at Wykham Park Academy, and she absolutely loves her job and has decided to speak about her role as part of World Immunisation Week April 24 – 30. 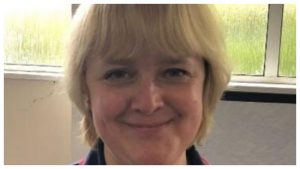 She told the Banbury Guardian: “I just love helping teenagers and young people. We’ve got a really nice team making a difference to young people and we get a real job satisfaction from that.”

Although supporting the delivery and coordination of immunisations is only a small part of the school health nurses’ wider role, Nikki is passionate about them and the role they play in preventing ill health and keeping young people healthy.

She added: “So many students were unable to have their immunisations in school last year due to the first lockdown.

“It is really important that we provide opportunities for them to catch up while also completing our usual programmes for young people in year 8 and 9 this year.

“In our school we have a lot of vulnerable children, and I’m passionate for them to have their vaccines.

“I ensure as many young people as possible have a consent form submitted and work with both parents and the school to make this happen. It is very satisfying to see the uptake of immunisations increasing. Immunisation is so important; it is going to protect children.”

April 24 – 30 was World Immunisation Week, and Oxford Health school nurses and immunisation team saw it as an opportunity to shine a light on the school aged immunisation programmes.

In the Summer term, three Year 10 students from the school took part in a week-long work...

Give your child the best start with Rivers Academy: Year 7 places available for the academic year beginning September 2023

Read more Give your child the best start with Rivers Academy: Year 7 places available for the academic year beginning September 2023
29/09/2022

All the students at Futures Institute Banbury contributed to achieving the prestigious award and their efforts were...