A charitable foundation has been able to award thousands of pounds to community groups across the county in a bid to support environmental projects.

The Dorset Community Foundation, thanks to its partnership with Wessex Water, was able to grant more than £16,000 to grass roots groups across the county for projects aimed at improving the environment in their communities.

The Wessex Water Environment Fund was launched with the community foundation by The Wessex Water Foundation, a multi-million-pound initiative, launched in June 2020, which provides a dedicated funding stream for projects across the region.

Many local grass roots groups across Dorset have been hit hard by the pandemic and were excited to receive the extra funding.

One of the recipients, Atlantic Academy on Portland received a £1,500 grant towards Island Community Action, which is working with the school to create a new wildlife garden on an unused grassy area. 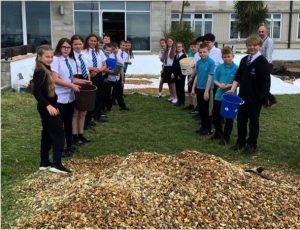 Atlantic Academy on Portland will be able to enjoy a wildlife garden Picture: Dorset Community Foundation

ICA chief executive Kim Wilcocks told the Dorset Echo: “There’s a lot of deprivation in Portland but also a passion for the local environment and we want to bring that passion into the school area.

“We want to turn this area into something that is environmentally very rich and educate the children as well as build their respect for nature and the bio-diversity of the area.”

The garden will have four areas, a coastal, a stone amphitheatre, a sensory area and a growing area.

She said: “The first section we are working on is the coastal area and the grant was essential in helping us cover the costs, so we are very grateful. We have built an eco-friendly base and covered it with shingle to reflect the beach.”

Transitions Towns Bridport will use their £1,500 grant to create a forest garden to give pupils at Bridport Primary School a taste of the outdoors – as well as fruit from the trees and bushes planted in it.

The money will fund a gardener to replace an ageing pond which will set the project in motion. 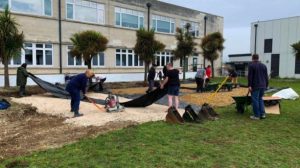