Natasha Baker OBE was just 10 years-old when she witnessed a moment that would shape the course of her life.
Watching the British Para-equestrian team achieve gold medal success at the Sydney Paralympic Games on TV in 2000, she turned to her parents and declared: “One day, I’m going to win a gold medal at a Paralympic Games.”

In the 22 years that have passed, Ms Baker has not only achieved her goal she has
surpassed it.
The grade III para dressage rider has won 11 gold and five silver medals at senior
championships including three Paralympic Games: London, Rio and Tokyo.

Keen to inspire and motivate other young people to achieve their ambitions, Ms Baker, who grew up and still lives in Cowley, held a Q&A with year 7 students and sixth formers at Park Academy West London.

The session also served to introduce the younger students to their Applied Transdisciplinary Learning project focussed on creating a new paralympic sport whilst developing their skills in leadership, resilience and diversity.

Ms Baker told the students at the Park View Road school: “There is a lot of blood, sweat and tears that are involved in my life but I feel very lucky that everyday in the life of Natasha is different.
“I contracted a viral infection transverse myelitis when I was just 14-months-old. I went to sleep in my cot one night completely able-bodied and woke up paralysed [TM is an inflammation of the spine and it affects nerve endings]. I was left with weakness and no feeling in my legs. It would have been an incredibly difficult time for my parents but they both have such positive mental attitudes and they brought that up with me. They always said to me, I can do anything I want, it may not be in a conventional way but it will be in the Natasha way and that’s how I live my life.
“At one point early on in my career I had no money to buy a horse, there was no funding and I had to get creative in order to be able to buy one. If I didn’t have this grit and determination in me, my success would not have happened.” 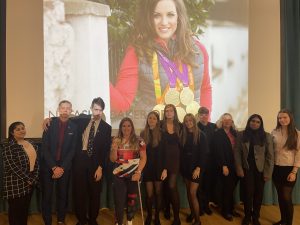 Asked by one student about what she would tell her younger self, Ms Baker, 32, said: “I like to live by the fact that I have no regrets because if you do something wrong, you’ll learn from it. So I think I would tell my younger self to grab every single opportunity with both hands even if it pushes me out of my comfort zone and to just keep going.
“For me, because I was inspired when I was really young watching the games, if I inspire somebody else to follow their dreams whether that’s in sport or whether you want to become a beautician, or a scientist or an author. If I can show you that you can follow your dreams no matter what then that’s like winning another gold medal.” 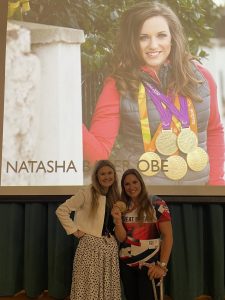 Vanya Harris, Careers Lead at Park Academy organised the talk with Ms Baker. She told the Hillingdon Times: “It was a fantastic opportunity for our students to hear about the dedication and pure grit that it takes to succeed and be the best in your field. I hope that this inspires them all to dream big and never give up.”