Seven-year-old Jewell Academy student Felicity Davey reveals why Bournemouth is the place to be in hit YouTube video!

A SEVEN year old star has been left “shocked” by the amazing reaction she received to the YouTube video she created on why you should visit Bournemouth.

Felicity Davey, seven, from Bournemouth, showcased her video-creating talent in a YouTube video titled ‘Why you should come to Bournemouth’.

She spent the entire summer making the video, which features some of her favourite places.

The Jewell Academy student produced the video as part of a school project that has not only wowed her teacher but also more than a thousand viewers as the video proves a hit on YouTube.

Felicity told the Bournemouth Echo: “I was shocked at how many views I have got and I have also gained subscribers from it.

“The video took all of the summer to make and I went to all of my favourite places.”

Felicity added: “I have made videos before but this one has done the best on YouTube.

“My favourite part of making the video was some of the outtakes, they were really funny.

“I’ve got more that I’m making that will come out soon but it takes a long time to edit them.” 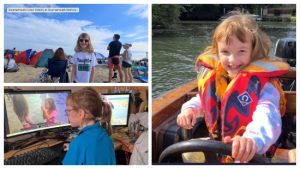 When Felicity is making her videos, her dad Mark Davey describes her as a perfectionist.

Mark said: “Sometimes we will have to take a lot of shots until we get the perfect one.

“She will sit down and do most of the editing herself as she is learning how to use the software, she can be very picky about all her transitions.

“She’s doing so well by learning these skills because the modern world will require them more than ever.

“Felicity loves YouTube, I often find she will take my phone and when I come back I find videos of her doing a dance or talking about her crystal collection.”

“Her favourite YouTuber is Salish Matter, she really likes her.”

Felicity shares her YouTube channel with her twin sister Beatrix, which is where the name ‘Trixy Flics’ came from.