Students at two Banbury secondary schools have shown their support for people in Ukraine through a donation drive.

Pupils at Wykham Park Academy and its sister school Futures Institute have brought in dozens of bags of nappies, bedding, medical supplies, a huge pile of unwanted clothes and boxes full of non-perishable food items.

Employees from Collins Aerospace, which works with both schools on a string of academic projects, have also donated. 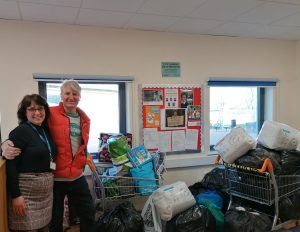 The items have now been passed on to two local businesses: Magna Exterior Systems which has a container full of items donated from the local community which is set to be dispatched to Ukraine.

Sam Donaghy, owner of Sam the Flowerman, has also filled his van with items and has now driven to a Polish orphanage to hand the donations over.

More than 1 million people are believed to have crossed from Ukraine into Poland since the Russian invasion began earlier this year.

Poland, which shares a 310-mile border with Ukraine, has taken the majority of the 1.7million people who have left their homes since the war began. Aid efforts have largely been run by volunteers, NGOs (Non-Governmental Organisations) and municipalities.

Mrs Grant said the generosity shown by parents and pupils to help has been heart-warming.
She told the Banbury Guardian: ‘’The donation drive started after a teacher at the school spotted Sam’s (the Flowerman) message on social media for donations to take to this Polish orphanage.

’Parents and pupils have donated hundreds of items and the piles created have been topped up with items from employees at Collins Aerospace. Anything Sam wasn’t able to take has been handed to local firm Magna.
‘’It has been nice to be able to help support in whatever way we can.’’