Successfully spotting that a Year 11 student in her class needed extra learning support has led to teacher Sian Llewelyn being crowned Wellbeing Champion of the Year for Hounslow.

Sian was awarded her accolade at this year’s London Teacher of the Year Awards 2021.

Sian, a much-liked and respected member of staff at Rivers Academy West London is also a trained SENCO (Special Educational Needs Co-ordinator). It was this skill set that led to her realising a student in her English class was struggling. Following an in-depth conversation with the boy, Sian correctly identified he has Irlen Syndrome. Measures were put in places to make classroom lessons more suitable for him and extra support provided. The teenager’s parents made their gratitude to Sian known by nominating her for the award.

A delighted Sian was presented with her award at a recent ceremony in Brighton and told the Hounslow Herald: ‘‘I don’t like being in the limelight but it was a nice moment because the recognition was fully there – I have had thank you cards and support from parents of students but to be given a nomination and then to go on and win is really something.

”It’s definitely one of the highlights of my career so far. It felt incredible, I was shocked and very surprised. To me, I had just done my job. It was nice to feel appreciated. The win was really just helping the student and his family, that was the first triumph for me.’’ 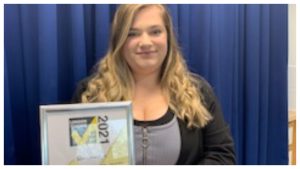 Sian Llewelyn pictured with her award

Irlen Syndrome causes the brain to struggle to make sense of the visual information it receives. Images and words can appear distorted or jumbled and sufferers can also experience headaches, migraines and problems with depth perception.

Sian, a former Rivers student who took over as SENCO at the school last year, said: ‘‘The student was new to me, I had not taught him before and it was when I was teaching him English that a couple of things alerted me to him potentially being SEN (Special Educational Needs).’’ 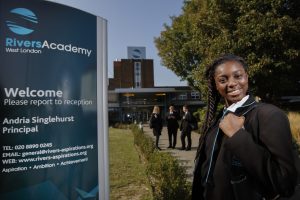 Sian was able to put a support plan in place for the student and also spoke to other teachers at Rivers to make sure the strategies in place applied to all his lessons.

Almost immediately, his grades improved and he left school this summer with a string of qualifications that allowed him to accept a place at his chosen college.

Sian said her award win has spurred her on with the teaching work she is keen to do.

She said: ‘‘It felt good that in my role I was able to support someone who needed it and that the family were very appreciative. It’s made me even more determined to raise awareness around pupils and teachers.’’

Andria Singlehurst, Principal at Rivers Academy which is part of the Aspirations Academies Trust, said: ‘‘We are all delighted that Sian’s work for Rivers children has been recognised in this award, it is incredibly well deserved. Sian is highly skilled in supporting every child to achieve their very best and cares deeply that each child’s needs are fully met.’’